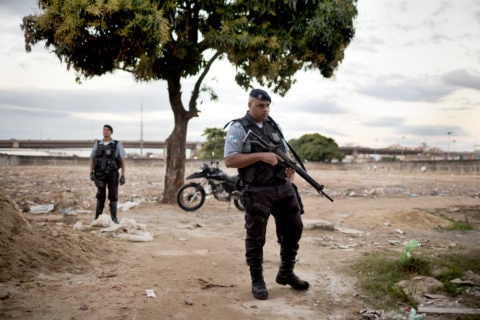 Pacifying Police officer Carlos Guimaraes on patrol in Complexo do Caju a newly pacified favela in the city's North Zone. In the run up to the 2014 FIFA World Cup and the 2016 Olympic Games special forces units have been deployed in force in a concerted effort to take control of Rio's notorious favelas. The Complexo do Caju was occupied by security forces in March 2013. Elite police units, backed by armoured military vehicles and helicopters, entered and remained in the neighbourhood in an attempt to drive the violent and heavily armed drug gangs out.

ARTICLE 19 is seriously concerned about a lack of transparency around security preparations for the upcoming Olympic Games, set to begin today.

As a result of Freedom of Information (FOI) requests, ARTICLE 19 and Justiça Global have found that:

Responding to the rejection of nearly half of the FOI requests submitted,  Paula Martins, Director of  ARTICLE 19 Brazil and South America, said “large-scale events such as the Olympic Games are  a significant burden on public finances. Furthermore, reports of the forced removal of people from their homes, the criminalisation of social movements, and increased militarisation of society means the public’s right to know is more important than ever.”

According to the Access to Information Law (AIL), all public documents which are classified as ‘secret’ must point to the concrete risk that the disclosure of the documents would present to public safety in order for the rejection of the FOI request on the basis of secrecy to be justified.

However, state agencies consistently used ‘secrecy’ as the basis for rejecting FOI requests without providing sufficient explanation. The State Security Secretariat for Rio de Janeiro refused to release information regarding the software and electronic equipment purchased by the police for the use during the Olympics on the basis that such information was ‘strategic and secret’. They provided no explanation of the impact of revealing the information as is required under the law.  The Ministry of Defense simply responded with a list of the generic nature of software and electronic equipment acquired (e.g. computers),  but did not reveal their names or specific details.

When ARTICLE 19 and Global Justice submitted requests to the Secretariat of Public Security of Rio de Janeiro, Rio de Janeiro Court, Ministry of Defense, Federal Police, and the Ministry of Justice about the norms (operational guidelines, manuals, etc) that would regulate the approach to security during the Olympics, many answers given were evasive, and others revealed that nothing had been established. In the case of the Federal Police, the agency responded that there was so such guidance or regulation, but that if there were, this would be kept confidential, despite society’s right to know the remits and responsibilities of the police.

“Society has the right to be informed and even participate in the development of core policies in the public interest, such as public security, transportation, and housing. With any of these policies and development projects, where human rights violations are uncovered, appropriate investigations must follow,” added Martins.

Despite the importance of transparency in public agencies, the Secretariat of Public Security of Rio de Janeiro was reluctant to provide information on the weapons and security equipment it had purchased ahead of the Olympic Games. ARTICLE 19 and Justiça Global had to submit three appeals, taking over two months, before receiving a response that confirmed they had purchased large numbers of weapons as part of their security strategy for the Olympic Games.

ARTICLE 19 is concerned by revelations that state agencies have stockpiled weapons such as rubber-bullets and teargas ahead of the Olympic Games particularly in light of the recently passed Anti-Terrorism Law, which ARTICLE 19 has openly criticised for its negative impact on human rights and civil liberties.

“The Anti-Terrorism Law references a number of very general concepts, which could be used to criminalise and restrict social and protest movements, and thus negatively impacting the right to freedom of expression,” explained Martins.

ARTICLE 19 continues to call for greater transparency of security policy in Brazil so that the public can hold state agencies to account for their actions and ensure the respect for human rights.

Between January and February 2016, ARTICLE 19 and Global Justice submitted 16 requests for information to six Brazilian government agencies which are involved in the security arrangements for the Olympic Games. Of the 16 information requests that were sent, only nine received response.

All the information requests submitted are available in Portuguese here.