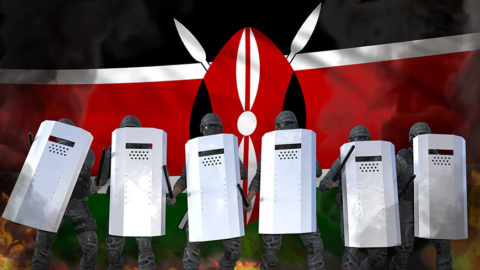 By law, all Kenyans have the right to equality and to be free from discrimination. These rights are guaranteed in in our Constitution and should guide the enforcement of laws. Yet in Kenya’s poor urban areas, where the state has failed to provide decent housing, the right to the highest attainable standard of health, the right to food, the right to education and the right to the security of the individual, equality and non-discrimination are scarce or simply do not exist. There is heavy police presence in these areas, but police do not work to strengthen the rights of the residents. Instead, police officers routinely threaten, harass, intimidate and even kill them with impunity.

When the COVID-19 pandemic hit the world, governments quickly realised that they needed to impose measures to curb its spread. One of the measures emphasised was the washing of hands with soap and running water. Yet when residents of the Matopeni area of Nairobi presented a petition about water shortage to Nairobi Water Services on 9 June 2020, they were arrested for failure to observe COVID-19 regulations relating to the prohibition of public gatherings and maintaining of social distance.

The COVID-19 pandemic has not only exposed the inequalities that exist, especially for people living in poor urban areas, it has exacerbated them. These inequalities are apparent in both the enjoyment of social economic rights and in the enforcement of the law.

When the police were given powers to enforce the COVID-19 regulations on top of the already-existing laws, we witnessed a new wave of police brutality, especially in the poor urban areas and neighbourhoods.

There were a number of reported cases of fatalities resulting from police using excessive force against residents of poor urban areas.

The lives taken by police brutality

In one example, while enforcing the newly-adopted curfew on the evening of 30 March 2020 in Kiamaiko, an estate in Mathare, the police shot Yassin Moyo, a 13-year-old boy who was standing on the balcony of his family’s home. He was at home, exactly where he was supposed to be. A police officer, Duncan Ndiema Ndiwa, has since been charged with Yassin Moyo’s murder. The case of Yassin Moyo confirms that police indeed used live bullets to enforce a curfew that was ideally put in place to reduce infections and the resulting fatalities. At some level, the residents of the poor urban areas could have been said to be more likely to succumb to police brutality during the enforcement of curfew orders than from COVID-19.

In yet another case, on the night of 3 May 2020 in the Mathare Mradi area, 36-year-old Vitalis Owino was suspected to have been killed by the police when he went to use a public toilet and then go on to get some supper for his family. Eyewitnesses said he was beaten to death. This prompted a protest the following day by residents of the Mathare area to demand for proper investigations into and redress for his killing.

The following month, on the night of 1 June 2020, police were suspected of having shot and killed James Murithi, a homeless casual labourer, in the Bondeni area of Mathare when he was found in a public area during curfew hours. This was yet again followed by protests calling for the arrest and prosecution of the police officer responsible.

The excesses of the police were so widespread that by July 2020, the Independent Police Oversight Authority (IPOA), a civilian oversight body for the National Police Service, had recorded more than 95 reported complaints of police misconduct and at least 26 deaths resulting from police violence during the enforcement of the curfew, with the majority of these incidents taking place in and affecting people in poor urban neighbourhoods.

A strong tradition of protest stopped by the police

As a result of these relatively tougher measures to enforce any law in poor urban areas, protests against police brutality are common, and this brutality and protests have continued throughout the last year. The Social Justice Centres operating within poor urban areas usually organise annual marches on 7 July to commemorate SabaSaba. SabaSaba dates back to 7 July 1990 and is one of the most important days in the history of the freedom of Kenya, when protesters gathered at Kamukunji to oppose the oppressive regime, a move which was critical for multi-party democracy. The pro-democracy rally was declared illegal and two of the promoters of the protests were severely beaten three days before the protests. During the rallies, police used tear gas and Daniel arap Moi, who was then president, later ordered the arrest of the reform proponents.

Indeed, the theme of the 2019 SabaSaba march was ‘Stop The Bullet KE’ to remember the victims of police brutality and extrajudicial killings in slums and informal settlements. Protesters also demanded an investigation and redress for the victims.

In 2020, the theme of the March was ‘Tekeleza Katiba,’ which loosely translates as ‘implement the Constitution’. Yet again, one of the objectives of the march was to demand an end to police brutality in poor urban areas, as well as the fulfilment of economic and social rights of the residents in the area. But the police disrupted the march before it even began, using tear gas and a heavy police presence at a city office where a petition was due to be read about police behaviour. Police arrested 56 protesters and detained them until the end of the day, severely disrupting the march. In a video that went viral, police are seen harassing Wanjira Wanjiru, a member of the Mathare Social Justice Centre , and threatening her with arrest. She is heard saying, “I am not cooperating and I am not going [to the police station]. Why are you arresting me? Give me a reason. I protest because you are killing us in poor communities.” Only after challenging the police to give her a reason for the arrest and asserting her right to protest did the police let her go. It is significant that the police responded with the same excess force that was the very subject of the protest.

In the end, the result of harsh policing has been a strained relationship between the police and the residents of the poor urban communities. The broken trust between law enforcement and residents has only worked to the detriment of their enjoyment of the right to protest. It is important to note that even though law enforcement readily uses the COVID-19 regulations to arrest and charge protesters, the same approach will not be applied to politicians conducting public rallies in the same areas. Indeed, the right to freedom of assembly could almost be said to be the right of the elite and the rich. The police will adopt de-escalation tactics or entirely refrain from any disruption for elite profession strikes and protests and political public gatherings, yet it will not hesitate to use excessive force to disrupt protests by residents of the poor urban areas.

The key theme that runs through the core human rights instruments to which Kenya is party, and which effectively form part of our laws, is the right to non-discrimination and equality before the law.

ARTICLE 19 Eastern Africa will continue advocating for the management of protests in Kenya in line with the African Commission on Human and Peoples’ Rights (ACHPR) Guidelines on Freedom of Association and Assembly in Africa and the Guidelines for the Policing of Assemblies by Law Enforcement Officials in Africa. It will continue to work for the right to protest, the right to equality, and the right to live without discrimination.