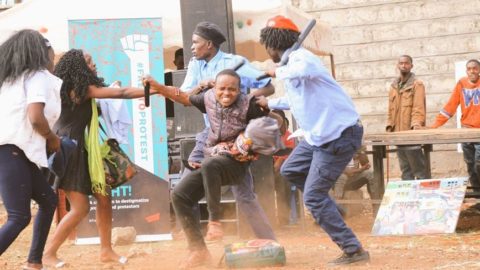 In Kenya, further education institutions have a history of using repressive tactics to suppress dissent among the student community. In fact, these tactics date back to the very establishment and formalisation of university education in the country.

The state, through its cronies positioned in institutions of higher education, has created an environment of fear and frustration. It has done this by passing laws and policies that make it hard for students and student leaders to work and organise effectively. Student handbooks have policies and rules that have been deliberately drafted to throttle civic space at further education institutions. For instance, Kenyatta University has a social media policy that makes it unlawful for any student to post anything that criticises  the university administration. On 1 November 2017, after student Morara Kebaso posted so-called “inappropriate” content on social media, the university administration used part 3 (2) of the policy, which refers to social media restrictions and exclusions, to suspend him and prohibit him from participating in the then upcoming student elections. Kebaso has since filed a case for alleged un-procedural suspension.

Rule 18.1.4 of the Students’ Handbook of the University of Nairobi prohibits students from organising or participating in any demonstrations, gatherings, ceremonies or processions for which approval has not been obtained from the National Police Service. Anybody who is not privy to how a particular university has historically dealt with its student activists will be excused for believing that official notification of a gathering is a noble thing to do, and that it connotes order and procedure. However, the truth is very different. The students who have tried to follow the rule before tell stories of frustrations and lies, or at least negligence. The moment a student leader takes a letter to the university chief security giving notification of a planned gathering, the officer may either refuse to accept the letter or take a copy and fail to acknowledge receipt. In this circumstance, it is very hard to prove that notification was given.

If students decide to go ahead and conduct the gathering anyway, they are then on the path of disciplinary action and possible suspension, or even expulsion! It all depends on the mood of the disciplinary panel on the day of the hearing. For instance, in 2018, at least five students were suspended for conducting a series of campus meetings even after they had notified the administration of their plans to do so. The administration denied ever receiving such a letter.  Some of the affected students sought legal redress and it was the position of the court that the suspensions were unlawful. The disciplinary procedures, as part of the university regulations, were found to be inconsistent with the provisions of the Fair Administrative Act and Article 50 of the Kenyan Constitution on fair hearings.

Voting is an essential component of modern-day democracy and its absence, in student environments and any other, naturally affects the quality of leadership. At the national level, the National Assembly passed a draconian law that completely isolated students from any meaningful leadership process. The University Amendment Act of 2016, which updates the University Act of 2012, replaced the popular vote system in student organisations and unions with an Electoral College one. Unlike the popular vote system, where students directly chose their preferred leaders, the Electoral College vote system requires leaders to be elected through a small group of student representatives known as delegates. Simply put, there is currently a small group that votes in leaders on behalf of the greater student community. There is thus no direct contact between the chosen representatives and the students; and by extension no legitimacy. This is unlike the popular vote model where leaders, through popular campaigns, would have adequate time to endear themselves to the students during the popular campaigns, giving the voter and leader a natural connection.

The National Students’ Caucus (the Caucus) believes that, currently, engagement between the student community and the wider civil society is yet to be structured in a way that any meaningful long term outcome is achievable, although civil society does have a degree of natural empathy for the student movement. Co-ordinated efforts between the student community and civil society organisations could defeat the Electoral College vote system and revive the Kenyan student movement. This is a partnership that needs to be explored.

Through civil society engagement, the Caucus will have an opportunity to build its leadership capacities and consequently adopt an appropriate methodology that it can use to sustain its activities in the long run. The Caucus is at the moment grappling with resource constraints and this has greatly limited its scope. Therefore, civil society organisations will be vital in helping the Caucus mobilise resources to facilitate its leadership activities. Since its official launch three years ago, the Caucus has been involved in series of campaigns regarding civic space issues within universities. Of particular focus at the moment is the removal of Section 18 1 (C) and (D) of the University Amendment Act of 2016 because of its impact on students’ elections and the resulting shrinking of civic spaces in higher learning institutions.

The freedom to protest, express and assemble are key  issues for students and universities, and reflect the wider environment and concerns about freedom in civic space throughout the country. Universities are supposed to nurture free thinking and the free exchange of ideas. Its transitional nature means that people who go into education eventually join the greater public. Nurturing the ability to think and express freely are thus vital tools that will equip people for actively contributing to the country’s governance process as active citizens.