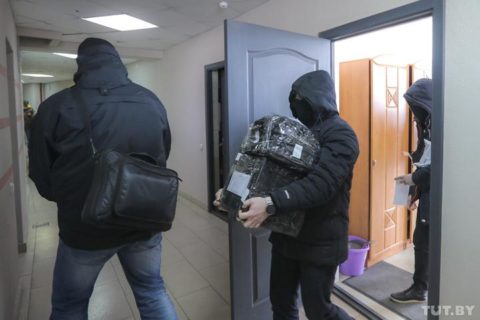 The homes of journalists and human rights defenders were raided on February 16. Photo credit: TUT.BY

This morning, 16 February, 2021, security forces searched the houses of a number of journalists and human rights defenders, as well as the offices of the Belarusian Association of Journalists (BAJ) and Human Rights Center Viasna. At least 30 people were targeted in police raids today, during which their equipment, in some cases money, was seized. Those targeted include:

It is not known whether any of the journalists or activists have been detained.

According to the Investigative Committee, the raids are linked to a criminal case opened under Art. 342 of the Criminal Code: organisation and preparation of actions that grossly violate public order, or active participation in them.

On 9 February, ARTICLE 19 and a coalition of NGOs appealed to the European Union to take further steps to protect the right to free expression and freedom of assembly in Belarus, and to highlight the fact that approximately 400 journalists have been arrested, many of them violently, since the fraudulent and elections on 9 August. The group called for new economic sanctions to be brought against Lukashenko’s government and for greater support for independent journalists to be put in place.

“The Belarusian authorities are committing atrocities against those documenting abuses with total impunity,” said Sarah Clarke, Head of Europe and Central Asia at ARTICLE 19. “The EU and international community must do much more – including through advanced targeted sanctions and accountability mechanisms – to send a clear message to the Belarusian government that these violations will not be tolerated. This is how they will demonstrate that they stand in solidarity with the people of Belarus in their rights to a free and fair election, to free expression and to protest.”

We stand in solidarity with our Belarusian colleagues and we are calling on the international community to strengthen the pressure on the Belarusian authorities, including through increased targeted sanctions. It is clear that Lukashenka’s aim is to destroy what remains of independent press and voices, including those who are helping the victims of human rights abuses and torture. As the situation in Belarus continues to deteriorate, we are also calling on the international media to continue raising awareness about the ongoing crackdown on protesters, activists, journalists and human rights defenders. Belarusian voices need to be heard now more than ever.

As we approach the 46th Session of the Human Rights Council, which will see the European Union lead a new resolution on Belarus, we also call for heightened accountability measures to be put in place to respond to the escalating situation, including a mechanism that can produce evidence against the violators of human rights.