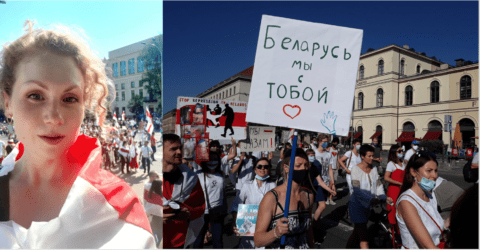 As Belarus marks six months since Alexander Lukashenko claimed a landslide victory amid widespread recognition of electoral fraud, free expression and human rights organisations around the world are joining an International Day of Solidarity with Belarus on 7 February, calling for the unconditional and immediate release of journalists and protesters.

‘I, like many experienced colleagues, have little immunity to pressure from the authorities,’ journalist Tatsiana Bublikava told ARTICLE 19. ‘Journalists have been detained by the police, tried for journalistic work, jailed, and used as bargaining chips with Europe for decades. I myself was sentenced to 10 days in jail in 2010 for covering a protest rally by people who disagreed with Lukashenko’s election victory.’

Since the beginning of the protests, media around the world have noted the fact that women are often on the frontline of the struggle with the regime. One can say that revolution in Belarus is female, whether it’s the courageous Sviatlana Tsikhanouskaya who had to flee the country with her children after putting herself forward as an opposition presidential candidate, or Maria Kalesnikava, another opposition leader, currently in detention. Just recently, journalist Nadezhda Kalinina published her terrifying testimony from detention, describing in detail the poor sanitary conditions in detention centres, including overcrowding and no access to medication.

‘The law enforcers tell the detained women: don’t walk the streets, stay at home with your children,’ says Bublikava. ‘This “care” for children is very cynical. There are mothers among the political prisoners. They could have been released for the sake of the children, but no one does it: this is a message to others to keep their heads down. The authorities persecute mothers who dare to “go public”. Women, including female journalists, are a vulnerable group in Belarus and are under more pressure.’

A Long History of Crackdowns

Bublikava, who works for independent news agency BelaPAN, described Belarus’ long history of cracking down on independent journalism. She explained that when she started working as a journalist at the age of 16 the Lukashenko regime was already censoring journalists, closing training programmes and stifling dissent.

‘There was more pressure on freedom of speech and the media, on civil society, the first opponents of Lukashenko were murdered. And now I am glad, I am relieved that the people of Belarus have woken up.’

Since protests erupted in August following the disputed election results, Belarusian journalists, activists and protesters have routinely been described as brave and fearless, and Bublikava is no exception.’Partly because of my experience, I am not as afraid as I could be,’ she said. ‘Today I have a family and two children, the regime has hardened, the police and the courts are carrying out political orders, persecuting those who disagree with the authorities. And I am worried. Especially as the authorities are changing the laws to suit their purposes. Soon they will adopt a law to persecute all those who criticise the authorities. And that means that analytical journalism is under threat of extinction.’

In August, protests against the election results made international headlines. But soon media focus shifted, and the Belarusian authorities recalibrated their tactics, and once again more specifically targeted the people trying to get the news out.

‘The search of our newsroom BelaPAN really frightened me,’ Bublikava said. ‘I was writing an article and I was immersed in my work when a shout from someone stopped me. It was an armed man in a mask and flak jacket. He ordered me to step away from the computer and not to touch the phone. My heart raced with fear. Later it turned out that this was a search in connection with the arrest of our media consultant Andrei Aliaksandrau. I was admitted to the hospital with a hypertensive crisis, accompanied by two security guards. From the hospital toilet, I made a video of the raid on the editorial office. The medics helped me.’

ARTICLE 19 together with other human rights organisations, has called for the release of Aliaksandrau, who led media freedom programmes for ARTICLE 19 and Index on Censorship while based in the United Kingdom.

‘My main task is to tell the truth as much as I can,’ Bublikava continued. ‘It is truthful information that pushes people into action, makes them push for change. Silence is now very expensive. I am tired of being afraid, I want a free life for myself, my children and our beautiful people.’

On Sunday, the international human rights community will come together in a Day of Solidarity with Belarus, and Belarusian journalists including Tatsiana Bublikava will be hoping the international media and politicians around the world will take note too: ‘What can people abroad do for us? To condemn as loudly as possible, to support by all available means: morally, materially, informationally. Today’s authorities in Belarus are committing crimes against basic human values, they devalue life, freedom, freedom of speech… This is an evil at the borders of Europe in the 21st century, which has to be stopped.’