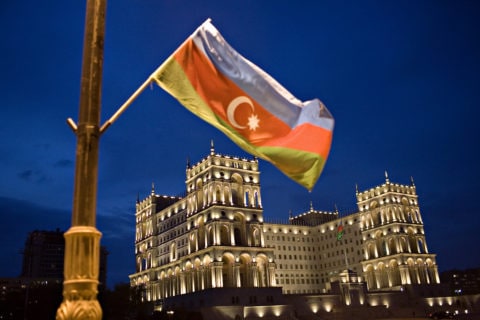 An Azerbaijan flag flies from a lamppost in front of Government House in Azadlig square.

ARTICLE 19 welcomes today’s release of human rights defenders, journalists and activists in Azerbaijan and calls on the Azerbaijani government to immediately and unconditionally release all those who continue to be detained on politically-motivated charges.

This afternoon, a Presidential Pardon was issued, listing the release of a number of people, including the following:

“Today’s news will be of comfort to the family of friends of those released. However, it’s worth remembering that these journalists, human rights defenders, and activists should never have been imprisoned in the first place and a number of others remain in prison on trumped-up and politically motivated charges” stated Katie Morris, Head of Europe and Central Asia at ARTICLE 19.

In addition to today’s Presidential Pardon, this morning, the Baku Court of Appeal ordered the conditional release of journalist Rauf Mirkadirov, who was sentenced to six years imprisonment in December 2015 on charges of high treason. The Court of Appeal reviewed this sentence, ordering a five year suspended sentence and releasing him from the courtroom.

ARTICLE 19 welcomes the Presidential Pardon and the conditional release of Rauf Mirkadirov. However, we are concerned that many more innocent people remain behind bars, including Khadija Ismayilova, an investigative journalist, Intigam Aliyev, a human rights lawyer and Ilgar Mammadov, an opposition politician, among others.

We call upon the Azerbaijani authorities to drop all charges against Mirkadirov and to immediately and unconditionally release all human rights defenders, journalists, activists, and opposition figures who remain imprisoned on politically-motivated charges.