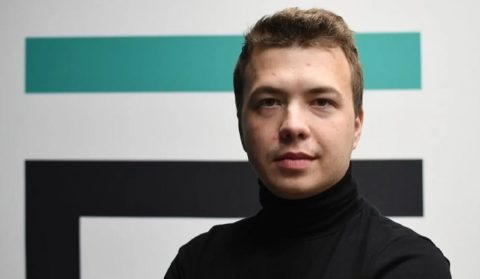 ARTICLE 19 is outraged and shocked that Belarus has forced down a passenger plane to arrest journalist Raman Pratasevich, co-founder of independent information outlet NEXTA. Pratasevich and his girlfriend, Russian national Sofia Sapega, were arrested after their Ryanair flight from Athens to Vilnius was forced to make an emergency landing in Minsk after Belarusian authorities alleged there was a security threat onboard.

Pratasevich fled the country in 2019 after facing persecution for his criticism of authorities, and has refugee status in the EU. In October 2020, NEXTA was labelled as ‘extremist’ by a court in Minsk. He is facing the following charges in Belarus: inciting social hatred (Article 130 of the Criminal Code), organising mass riots (Article 293) and organising group activities that violate public order (Article 342). He faces up to 15 years in prison. In Belarus, he is on a wanted list of “persons involved in terrorist activities”. We are deeply concerned about Raman’s treatment in detention, where the use of torture by Belarusian security forces has been widely documented, especially following the recent death of a political prisoner Vitold Ashurak in prison.

“The repression of independent voices in Belarus has been relentless since the August 2020 elections. The outrageous actions of the Lukashenka regime against opposition journalist Pratasevich are a violation of international law and create an extremely worrying precedent.  They require the strongest possible response from the international community, without which the Belarusian regime will be further emboldened,” said Sarah Clarke, Head of Europe and Central Asia for ARTICLE 19.