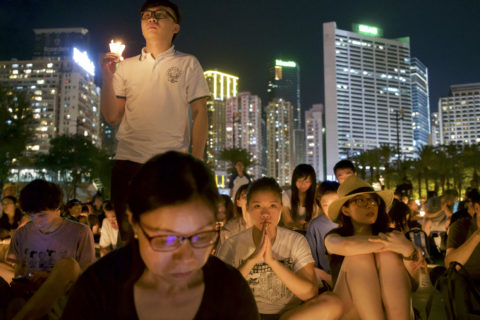 Panos: Thousands of people gathered on 4 June 2016, to commemorate the massacre in Tiananmen Square in 1989.

We do not know how many students and activists were killed on June 4, 1989, when the Chinese People’s Liberation Army opened fire and drove tanks into protestors occupying Tiananmen Square.

Before the onslaught, the passion and courage of thousands of people had been directed towards preparing for the worst.  Yet as the New York Times reported on the 21st May 1989, the protestors shared food and drink with the soldiers, and tried to explain to them the reasons why they had taken to the streets.  Some soldiers declared they would not touch a hair on the head of a student.

While the image of an unidentified man standing in front of the tanks is known around the world, details continue to be revealed of the massacre that took place day.  A cable from the British Ambassador to China, Sir Alan Donald, released in 2017, estimated that more than 10,000 protestors were killed.

Using state repression and censorship the Chinese Government has tried to erase the memory of those weeks in the spring of 1989.  Yet however much the Chinese authorities deploy the sophistication of censorship, and online surveillance, the Guardian has reported that activists within China mark the anniversary of the protest by fasting.

We in ARTICLE 19 will never forget the Tiananmen Square massacre, nor those who died fighting for their rights, or who dared to question the orders they were given. We join millions of people around the world who stand in solidarity with Chinese activists who continue to work for their rights to freedom and liberty to be respected by their State.

Yet we know that remembering Tiananmen Square is not enough. The international community must preserve the dignity of protest and protect the fundamental right to free expression.  It must present a true and honest vision to Beijing and other repressive states to enable rather than restrict the participation of citizens in their own domestic affairs.

Protecting the right to protest

Acts of popular protest take many forms.  Tiananmen Square is a reminder of how powerful protest is, and how, even in the most repressive and authoritarian regimes, people are still willing to risk their lives to stand up for what they believe in.

The suffering of protestors currently in detention without trial in Saudi Arabia, Iran, Bahrain, China and far too many other states, is testament to the threat that public protest presents to repressive regimes.  Just this week, it has been reported that over 100 pro-democracy protestors in Khartoum, Sudan were killed by government forces who raped and murdered unarmed civilians in acts of brutality that were solely designed to intimidate and force people off the streets.

The right to assemble and demonstrate  is essential for participation in civil society.  We use indicators that measure protest in our Expression Agenda Report that looks at the state of freedom of expression in over 100 countries around the world. We can all see how the Internet has facilitated a new era of protest: collective action is organised more easily on a global scale, such as the 2017 women’s marches and the rapid rise of climate crisis activism.  We have also seen how protests create real world change, as in Algeria earlier this year, when demonstrations led President Abdelaziz Bouteflika to announce that he would not be standing for a fifth term.

Surveillance and the shift towards authoritarianism

However the threat to our right to protest and expression is real.  Under President Xi Jinping, China has become increasingly authoritarian after an initial period of promising change and reform in the late 1990s.  The umbrella protests in Hong Kong this year are evidence that state repression from China has chilled a once vibrant participatory democracy.

Today, China has one of the most repressive censorship regimes in the world, and is at the forefront of state surveillance and censorship online. Repressive measures include the well-known ban on the use of anonymous browsing tools, the censorship of search results and the blocking of websites, such as Chinese Wikipedia. More recently, the Chinese Government has ignored  international criticism over its brutal crackdown against Uighur Muslims in the Xinjiang region. It has been reported that up to 1.5 million Uighurs and other Muslims have been interned in camps, where the Government claims they are being ‘de-radicalised’. In May, a Human Rights Watch report confirmed that the Chinese police where using a mobile app to surveil and then arbitrarily detain Muslims.

As we know China does not have a monopoly on repression.  Equally concerning are efforts by a growing number of states to command access to sensitive personal data retained by corporations.

Such acts diminish the authority of States because they undermine the rights of their own citizens.   As we remember Tiananmen Square, we must also work much harder to understand the threats that surveillance, unaccountable internet shut-downs, and state sponsored fire-walls pose to expression.  The role of the state, and especially of progressive states, is to protect and enhance the rights of its citizens, to show the plight of those who suffer because they are denied the same universal freedoms, and never to forget those who have died in the defence of freedoms so many of us enjoy.