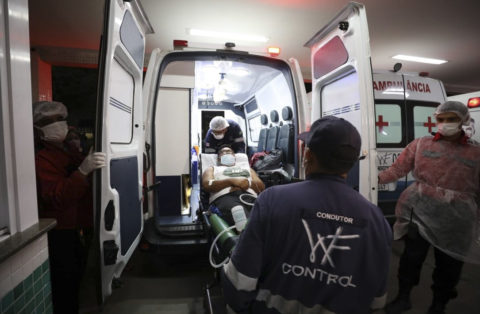 The Covid-19 situation in Brazil continues to be critical. Almost 265,000 people have died and cases continue to rise, with an average of 1,455 people dying every day over the last week — the highest average since the outbreak of the pandemic.

On 22 January, Brazil was reported to the Inter-American Commission on Human Rights (IACHR) for its failure to protect the right to life, health and integrity in the state of Amazonas.  The region has seen the collapse of its healthcare system, and people suffering from serious cases of Covid-19 have been left without access to oxygen and urgent hospital supplies.

The human rights groups submitting the complaint to the IACHR*, ARTICLE 19 among them, also highlighted the fact that Brazilian citizens, and citizens of Amazonas state in particular, were being denied access to vital information.

The organisations reported that the disinformation promoted by the Brazilian state has had two major consequences. First,  the information that has been denied could help citizens  to protect their lives, and should have been the basis for appropriate measures to be put in place by authorities. Second, the disinformation and lack of transparency has become an obstacle to the effective control and  management of the pandemic and mitigation of the crisis in the health system. Regarding the second point, the coalition of human rights groups demonstrated to the IACHR that the data provided by the government — for example, how many hospital beds are occupied —  has proved unreliable. In addition, the state failed to supply specific information, such as requests for data about hospital supplies including oxygen or medicines.

It was pointed out to the Commission that violations against the rights of indigenous, quilombolas, and riverine communities of the Legal Amazon were even more deadly than elsewhere in the country, given that those groups and that region has been severely affected by Covid-19 and cases are particularly high there.

According to data provided by the Articulation of the Indigenous Peoples of Brazil (APIB), the state of Amazonas has so far recorded 235 indigenous people killed by Covid-19, with the last peak being 8 February, in which four deaths were recorded. And yet, people living in the region have been repeatedly blocked from the information they need.

Although Amazonas state has double the national mortality average for every 100,000 inhabitants, it has relaxed quarantine rules and reopened stores and restaurants.

Manaus, the capital of Amazonas, is heading for a third wave of infections, researchers and experts working in immunology and on infectious disease research have warned. Their view that when the situation stabilises sometime in March, the number of deaths will still be extremely high, a prediction supported by experts in a range of relevant fields, including mathematics, statistics and biology. Their pooled research had previously been published in Nature Medicine journal in August 2020, and their predictions for a second wave of Covid-19 cases were accurate. Furthermore, they say, if action is not taken and key measures not put in place soon, Amazonas state will continue to experience the pandemic for months to come, and the pandemic could even extend to 2023.

The government failed to adequately establish guidelines, including World Health Organization briefs, on self-isolation and other measures crucial for protecting communities, curbing the spread of Covid-19, and for reducing the growing number of infections and deaths.  Instead, on 16 February, despite having over 90% of hospital beds occupied, with a daily average of 70 deaths and a hospital waiting list of more than 200 people, the government of Amazonas announced measures to relax social isolation.

ARTICLE 19, Real Amazon, the Black Coalition for Rights, Conectas Human Rights, Global Justice, Land of Rights and a wide range of civil society organisations and activists denounced the violations in the state, and President of the Commission and Rapporteur for Brazil, Chile and Honduras, Joel Hernández García, registered the official complaint during an emergency meeting of the Organization of American States’ Rapid and Integrated Response Coordination Unit (SACROI COVID-19), expressing concern at the current situation in Amazonas state.

The organisations highlighted that the violations are particularly alarming in the context of the pandemic and of Brazil’s position as one of the most affected countries in the world.  Brazil is also one of the worst-performing countries when it comes to handling the crisis.

Kátia Brasil, journalist and founder of the independent and investigative journalism agency Real Amazon, emphasized that the public health collapse, especially in Amazonas, is a historical case resulting from more than 40 years of neglect. In light of the pandemic, the calamitous scenario is increasingly evident. “The neglect of healthcare in Amazonas is so appalling that Manaus is the only city among the 62 municipalities in Amazonas to have hospitals with an Intensive Care Unit. For this reason, many people had already died due to the lack of beds in the capital and in the interior before the current crisis of the new coronavirus pandemic,” said the journalist, who is also a member of the ARTICLE 19 Council.

The Fiocruz/Amazon epidemiologist Jesem Orellana also warned that the lockdown proposed by the ex-mayor of Manaus in September 2020 was met with criticism from President Jair Bolsonaro, who at the time classified the proposition as “absurd”. Then, Wilson Lima, the governor of Amazonas, ruled out the lockdown and total isolation, something that could have not only drastically reduced the rising new coronavirus contagion rate in Manaus, but also could have prevented the violent peak of the second wave in January 2021, which resulted in the deaths of dozens of people who were essentially asphyxiated because of lack of oxygen in Covid-19 care and treatment units.

Residents and campaigners highlighted the catastrophic scenario spurred on by ineffective or absent strategies to deal with the pandemic in Manaus in August, when there were warnings about the growth of cases and the lack of supplies. It was also reported on January 4 to the Ministry of Health, led by General Eduardo Pazuello, who, knowing that the healthcare system could collapse, made a recommendation for early treatment with drugs scientifically proven to cause risk of heart damage and to be ineffective against the virus, and took no other steps to protect lives.

Brazil has repeatedly failed to comply with the recommendations of the Commission and other bodies working to confront the pandemic and the political, economic and sanitary crises continue to worsen.

In addition to its appeal to the IACHR/OAS, the human rights groups also called for the Commission to trigger a precautionary measure to demand that urgent steps be taken by the Brazilian state to guarantee the supply of oxygen, hospital supplies, and sanitary hospital conditions so the population of Amazonas will be able to access the public healthcare network.

The precautionary measure is an instrument of protection within the international system that enables the state to take immediate actions to protect rights that may be under threat and prevent irreparable damage, such as the risk to life and to physical integrity. This request was added to a range of other national and international complaints about the omissions and actions resulting from the Brazilian government’s political decision not to adopt recommended measures in the face of the Covid-19 pandemic, backed by the racist and ethnocidal ideas of its supporters, culminating in the violation of care protocols and in actions that aggravate the crisis.

In addition to the appeal from ARTICLE 19, Conectas Human Rights, Global Justice, Land of Rights, and the Black Coalition for Rights, evidence was presented by Kátia Brasil (journalist and founder of the Real Amazon journalism agency), Jesem Orellana (Fiocruz epidemiologist), Mauricio Ruiz (geriatric physician at the public Dr. Thomas Foundation for the Elderly), Vanda Ortega (nursing technician and part of the indigenous leadership at the Parque das Tribos), and Marinete Almeida Costa (indigenous leadership of the Tukano People).

The following have signed and support the precautionary measure: ARTICLE 19; Conectas Human Rights; Global Justice; Land of Rights; Black Coalition for Rights; Real Amazon Journalism Agency; APIB, Articulation of the Indigenous Peoples of Brazil; ASSOTRAM, Association of Transvestites, Transexuals and Transgenders of the State of Amazonas; CFEMEA, Center for Feminist Studies and Advisory Services; COIAB, Coordination of the Indigenous Organizations of the Brazilian Amazon; the Dandara Movement of Black Women of the Forest; the Human Rights, Crisis and Covid-19 Observatory; and Transparency Brazil.

*The IACHR is a principal and autonomous agency of the Organization of American States (OAS). Its mandate is to promote the observance and defense of human rights in the region.