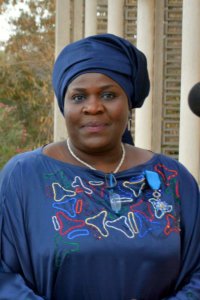 On Thursday 12th April, ARTICLE 19’s Regional Director for Senegal and West Africa, Fatou Jagne, was awarded the prestigious honour of Knight of the National Order of Merit (Chevalièr dans l’Ordre National du Mérite) by the President of France.

The presentation took place in Dakar and was made by M. Christophe Bigot, the Ambassador of France.

The award recognises Fatou’s human rights work in the Gambia, and her contribution to the democratic transition that begun in the country at the start of last year.   The achievements of Fatou and her team played an important role in defending human rights and fighting for a return to democracy over many years.

In December 2016, Gambians voted in a new era, electing President Adama Barrow as leader after two decades of repressive rule by former President Yahya Jammeh. During Jammeh’s period in power, human rights abuses and violence had silenced influential and critical voices, and led to the exile of human rights defenders, media professionals and many citizens.

Under Barrow, the new administration has already taken steps to release political prisoners.  The government has approved a bill to set up a Truth, Reconciliation and Reparation Commission to address past human rights violations and to undertake important reforms of laws. It also approved the agenda for the reforms of policies to strengthen democracy and repeal old laws that stifle expression.

Fatou and her team are continuing to work with local human rights groups to complement these efforts, to bring accountability on human rights violations, build civil society capacity and strengthen reforms.