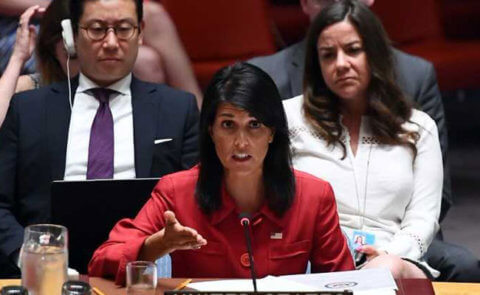 ARTICLE 19 deeply regrets the decision of the United States to withdraw from the UN Human Rights Council (HRC), announced on 19 June as the world’s top human rights body meets for its 38th Session in Geneva.

The withdrawal will greatly weaken efforts of the international community, including civil society, to protect the right to freedom of expression globally, while significantly damaging the reputation of the US. We urge the US to reverse this decision, and for political leaders across parties in the US to restate the country’s commitment to multilateralism and the promotion and protection of human rights.

“In its near-decade at the HRC, the US has often led efforts to protect free expression,” said Thomas Hughes, Executive Director of ARTICLE 19. “By vacating their seat, the US has merely empowered the worst suppressors of dissent to fill that void and set the agenda; this is to the detriment of everyone, including the US.”

“While this is undoubtedly a blow to free expression and to multilateralism, we are in any case optimistic that the HRC will remain a vital and unique forum to set global standards on rights and pursue accountability for violations. This will require those States who truly value the HRC’s mission to remain engaged, to be vocal defenders of free expression, and to address deficiencies with the HRC’s effectiveness through cooperation and strengthening, instead of reckless politics and posturing.”

The US exit from the 47-member UN rights body comes one year after Nikki Haley, the US Ambassador to the UN, conditioned continued US engagement on achieving a set of HRC reforms. That ultimatum included establishing competitive elections for HRC membership, removing habitual rights violators from membership, and removing perceived anti-Israel bias in the HRC standing agenda item on violations in the Occupied Palestinian Territories (OPTs).

Notwithstanding this ambitious agenda, President Trump’s administration then appointed no Ambassador to lead reform efforts in Geneva, and was working to no specified time frame. Proposals to drive institutional changes through a UN General Assembly (UNGA) resolution in New York did not receive sufficient support to proceed, amid concerns it could set a dangerous precedent for future unilateral attempts at reform to undermine the HRC. This, combined with a series of isolating votes on Israel and the OPTs, including at a recent specially convened session of the HRC, brought about speculation a leave was imminent, following moves to quit the UN Global Compact on Migration and the Paris Climate Accords.

The announcement came in a press conference convened by US Secretary of State Mike Pompeo and US Ambassador to the UN Nikki Haley in Washington DC.

It followed the conclusion of the second day of the Human Rights Council’s 38th Session, which saw a debate on the annual report of the UN Special Rapporteur on freedom of opinion and expression, as well as the negotiation of many resolutions crucial to the articulation of international standards on this right.

Discussions on reforming the HRC’s methods of work are set to continue through multilateral discussions in Geneva, with or without US engagement.