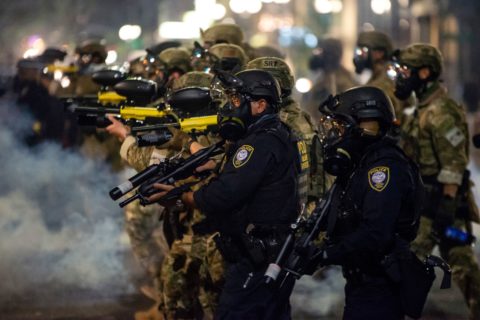 Photo by Nathan Howard/Shutterstock (10717549g) Federal police move through tear gas clouds in Chapman Square while dispersing a crowd of about a thousand people during the 53rd night of protests against racial inequality and police violence on Sunday. Federal Response to Portland Protests, Oregon, USA - 20 Jul 2020

Videos have been shared on social media that appear to show federal law enforcement agents in unmarked cars, dragging people off the streets and arresting them. Other footage shows agents assaulting a US Navy veteran who says he approached the police to ask them a question.

“The sight of unmarked, unaccountable officers violently removing peaceful protesters at random from our streets into unmarked vehicles is deeply disturbing.  Deploying federal troops is part of a wider tactic to sow divisions and create fear leading up to the November elections.  It is a tactic we have seen in autocratic states, where state interventions often deliberately escalate violence in order to further clamp down on their citizens’ rights.

“Protest is at the heart of American identity, and a Constitutional right protected by the First Amendment.  The President must respect American’s rights to protest without the threat of state violence.”

The Mayor of Portland, Ted Wheeler, told CNN that the troops were “sharply escalating the situation, and their presence here is leading to more violence and more vandalism”, and urged them to leave. However, the President has said that he would send troops to other cities where anti-racist protests are also taking place.

Since anti-racist protests began in response to the murder of George Floyd, ARTICLE 19 has called on US authorities to protect protesters and the media, and respect the right to freedom of expression.  All states must ensure :