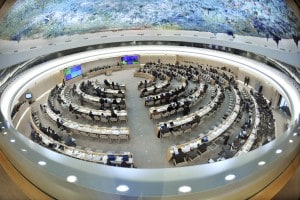 ARTICLE 19 welcomes the adoption by consensus of the resolution on Internet and Human Rights by the UN Human Rights Council (UNHRC), with the support of more than 80 co-sponsoring States. The resolution reaffirms that the human rights people enjoy offline, also apply online, including the right to freedom of expression.

“Around the globe, the Internet is the front line in the contest for civic space,” said Thomas Hughes, Executive Director of ARTICLE 19. “The Human Rights Council’s adoption of this resolution by consensus will be critical in our battle to secure Internet freedoms, including freedom of expression, association, assembly and privacy, where they are most at risk”, Hughes added.

Brazil, Nigeria, Sweden, Turkey, Tunisia and the United States of America formed the core-group that led the drafting of the text. A total of 82 UN States supported the text at its adoption.

Last week, ARTICLE 19 and 62 other organisations called on the UNHRC to robustly defend the freedoms of expression, peaceful assembly and association, privacy, and other rights online.

Importantly, the resolution reaffirms that “the same rights that people have offline must also be protected online, in particular freedom of expression.” Additionally, the resolution makes three important advancements:

The adoption of the resolution was not without controversy.

Despite numerous consultations on the resolution held by the core group throughout the HRC Session, bilateral negotiations continued after an initial draft was tabled up until the very last minute. In an effort to reach compromise, oral amendments were made to the text by the core group when it was presented. This included the addition of a new paragraph to the resolution, which stresses:

“The importance of combating the advocacy of hatred that constitutes incitement to discrimination or violence on the Internet, including by promoting tolerance and dialogue.”

This language reflects the consensus reached in HRC resolution 16/18, that the protection and promotion of freedom of expression is crucial to promoting tolerance and achieving equality. It also reinforces the guidance of the Rabat Plan of Action, which the UN Special Rapporteur on contemporary forms of racism, racial discrimination, xenophobia and related intolerance this week commended in his annual report for outlining practical measures for encouraging counter-speech to discrimination and hatred online.

However, these concessions were not enough for some States. China, supported by South Africa and others, brought a hostile oral amendment to the resolution, to include a further paragraph warning of the dangers the Internet poses for encouraging terrorism, extremism, racism, and religious intolerance. This would have introduced to agreed UN language a loophole for online censorship antithetical to the purpose of the resolution and international standards. Fortunately it was voted down by a resounding 28 votes to 15, with 4 abstentions.[1]

“We are alarmed that established democracies, such as South Africa and even India, distanced themselves from consensus by supporting China’s attempt to justify State censorship” Hughes said.

“The fundamental importance of open, critical and even controversial expression on the Internet is a universal value that applies in all societies. Today the HRC ultimately rejected attempts to condition the enjoyment of human rights on the Internet on ‘duties and responsibilities’ of Internet users. That is an important win, which the HRC must continue to build upon.”