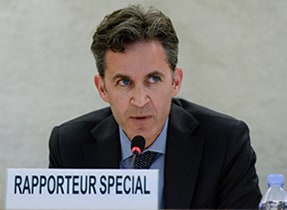 ARTICLE 19 welcomes the report of the UN Special Rapporteur on Freedom of Expression, David Kaye, on the role of the private sector in the provision of Internet and telecommunications access. The report represents a milestone in the UN’s efforts to promote the responsibilities of businesses to respect freedom of expression.

The Special Rapporteur presented the report, which States and other stakeholders then debated, at the 35th Session of the UN Human Rights Council (HRC) on 12 and 13 June 2017.

“Internet access has become a basic part of the exercise of many human rights. Today’s report is a wake-up call that the fight for free expression is not just the responsibility of States but also the private sector,” said Thomas Hughes, Executive Director at ARTICLE 19.

“For the first time, the UN expert has elaborated detailed standards on how digital access providers and industry bodies should respect freedom of expression and privacy online. Rather than promote purely commercial interests, the report also calls on States to put users’ rights at the heart of internet access policy,” Hughes added.

The Special Rapporteur’s report begins by stressing the obligations of States to protect and promote freedom of expression online. In particular, the Special Rapporteur examines the various restrictions placed on Internet access by States, including Internet and telecommunications shutdowns, requests for access to user data, direct access to Internet and telecommunications networks, weakening of encryption, and paid prioritisation and zero-rating schemes that undermine net neutrality.

The Special Rapporteur calls on States and the Human Rights Council to:

It also calls on States to prohibit the prioritisation of certain types of content and applications over others for commercial benefit.

The report goes on to examine the responsibilities of private actors to respect human rights in the provision of access to the Internet. The report details the role of telecommunications and Internet service providers, Internet exchange points, content delivery networks and network equipment vendors. The role of Standards Developing Organisations is examined in more depth in an Addendum.

The Special Rapporteur concludes that for the private sector to fulfil its responsibility to respect human rights, the digital access sector should allocate appropriate resources and commit to the principles of due diligence, human rights by design, stakeholder engagement, mitigation strategies, transparency and effective remedies.

The presentation of the Special Rapporteur’s report, and the responses of States and other stakeholders thereto, can be watched here (Human Rights Council, Regular Sessions, ID – SR on freedom of expression).

ARTICLE 19 took part in the consultations organised by the Special Rapporteur ahead of this report. In our submission to the report, ARTICLE 19 noted the challenging legal framework within which Internet access providers must operate, from telecommunications’ authorities broad powers to order Internet shutdowns or blocking of certain services to data localisation requirements. At the same time, we highlighted a serious lack of clarity when it came to the terms of service offered by Internet access providers. We also identified many areas where the telecommunications lobby has sought to undermine the rights of users, from undermining net neutrality to the rolling out of 5G.

ARTICLE 19 shares the conclusions of the Special Rapporteur on the role of the Internet access sector to respect human rights, in particular the rights to freedom of expression and privacy. The Special Rapporteur’s recommendations correspond closely to those in ARTICLE 19’s policy “Getting connected: Freedom of expression, telcos and ISPs”, to be launched at an HRC side event on 14 June. We recommend that telcos and ISPs should ensure that in their operations, they embody the fundamental principles of a human rights-based approach, including respect for human rights, participation, empowerment, non-discrimination and equality and accountability.

We also encourage Standards Developing Organisations to continue assessing the human rights impact of their work.

Following the presentation of the Special Rapporteur’s report at HRC 35, we call on States to act to bring their laws and practices in line with its recommendations, and for private companies to increase their efforts to respect freedom of expression on privacy online. We also calls on HRC states, in particular supporters of the Internet and Human Rights resolution, to integrate stronger standards on States’ obligations and private sector responsibilities into HRC resolutions in this field.

Alongside the presentation of his annual thematic report, the Special Rapporteur also presented reports on his official country visits to Tajikistan (March 2016), Japan (April 2016), and Turkey (November 2016).

We further call on countries with outstanding requests for official visits from the Special Rapporteur to make arrangements for the completion of these visits without further delay.