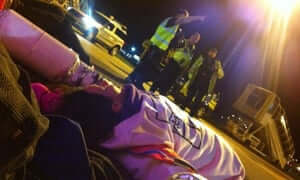 ARTICLE 19 condemns the decision of the Chelmsford Crown Court to convict the so-called Stansted 15 protestors under terror-related legislation. The charges are hugely disproportionate to their act of peaceful protest to stop a deportation flight. The protestors’ conviction on 10 December 2018 represents a disproportionate restriction of the right to protest which is likely to have a chilling effect on individuals seeking to exercise this right across the UK.

The 15 protestors had cut a hole in a perimeter fence and chained themselves around a plane at Stansted Airport on 28 March 2017 to prevent a deportation flight, which included asylum seekers whose claims had been denied. The protestors successfully stopped the flight from taking off, and were arrested and charged with aggravated trespass. However, the government later ramped up the charges to “Endangering safety at aerodromes” under Section 1 of the Aviation and Maritime Security Act, which carries a maximum sentence of life imprisonment. The law was brought in to tackle terrorist offences, and has no place in the policing of protests.

The protesters are part of a campaign group called End Deportations. Of the deportees on the plane, 11 of those are now having their claims for asylum reassessed.

Under international and regional human rights standards, any restrictions on freedom of expression, including protests, must meet the so called “three part test”: they must be prescribed by the law, pursue an explicitly enumerated legitimate aim and be necessary and proportionate to a pressing social need for the restriction.

Protests in the form of civil disobedience/direct action, such as is the case with the Stansted 15, that violate an existing law, involve the exercise of human rights and meet the requirements of this test. Additionally, ARTICLE 19 has long argued that in such cases, law enforcement and courts should consider a number of factors, including motivation of the protestors and non-violent nature of the protest. We have recommended that judiciary and administrative authorities should apply lenience in punishment and should consider whether strict application of criminal offences is an appropriate and proportionate form of restriction against protestors.