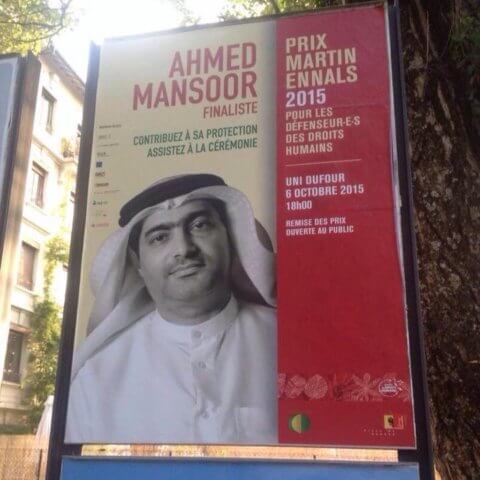 ARTICLE 19 calls on the authorities in the United Arab Emirates (UAE) to immediately and unconditionally release human rights defender and citizen journalist, Ahmed Mansoor, who was sentenced to 10 years in prison on 29 May 2018 for charges of insulting the country’s status, prestige, symbols and leaders.

Despite widespread calls for his release from human rights organisations and UN experts, Mansoor, 2015 winner of the Martin Ennals Award for Human Rights Defenders, was sentenced following his trial before the State Security Chamber of the Federal Supreme Court in Abu Dhabi. According to local media he was convicted of “insulting the ‘status and prestige of the UAE and its symbols’ including its leaders” and of “seeking to damage the relationship of the UAE with its neighbours by publishing false reports and information on social media.” He was also fined one million Dirhams (USD $272,294.00) and ordered to be placed under surveillance for three years on his release.

“This trial demonstrates the severity of UAE’s crackdown on freedom of expression and human rights defenders”, says Saloua Ghazouani Oueslati, Director of ARTICLE 19 MENA.” Instead of protecting Mansoor, authorities have used the country’s repressive criminal justice system to detain him for over a year and convict him as part of their campaign to silence dissenting voices. UAE must release Mansoor who is being convicted solely for his peaceful human rights work.”