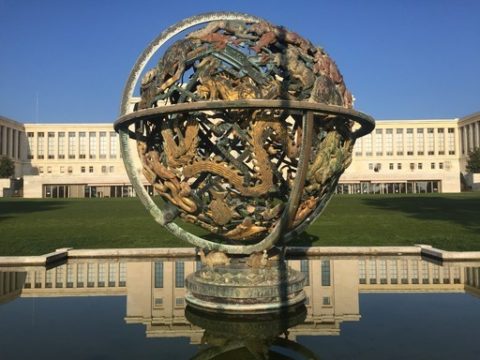 ARTICLE 19 is urging States to raise the sharply deteriorating situation for freedom of expression in Turkey at the 34th Session of the UN Human Rights Council, in their interventions under Item 4 of the agenda: country situations of concern.

The urgent need for international scrutiny on Turkey was underscored in the preliminary observations and recommendations of the UN Special Rapporteurs on Freedom of Expression and on Torture, following their separate November 2016 visits to the country. The situation has not improved in the months since. A Constitutional referendum scheduled for April threatens to consolidate executive power and compound existing human rights concerns, in an environment where the media and other independent and oppositional voices have largely been silenced.

In his global update delivered to HRC34 last week, the High Commissioner said the following on Turkey:

“I am concerned measures taken under the state of emergency appear to target criticism, not terrorism. The fact that tens of thousands of people have been dismissed, arrested, detained or prosecuted following the attempted coup – including numerous democratically elected representatives, judges and journalists – raises serious alarm about due process guarantees being met. It will be particularly crucial for the credibility of April’s referendum on amending the Constitution that space for open debate, free of intimidation, be guaranteed.”

The situation in the South East of the country is also the subject of a report released by the OHCHR on Friday. Among the findings, the following is said on the situation for freedom of expression:

“The use of counter-terrorism legislation to remove democratically elected officials of Kurdish origin, the severe harassment of independent journalists, the closure of independent and Kurdish language media and citizen’s associations and the mass suspension of judges and prosecutors have also severely weakened checks and balances and human rights protections.”

Following a violent coup attempt on 15 July 2016, the Turkish government has pursued an unprecedented crackdown on human rights, including on the rights to freedom of expression, freedom of association and the right to a fair trial. This has continued in the run up to an April referendum at which the country will vote on whether to give the president significantly increased powers and to remove checks and balances on the executive.

Official figures show that over 40,000 people detained in the months after the coup attempt are currently held in pre-trial detention amidst credible allegations of torture and ill-treatment in police custody. Around 100,000 civil servants, including teachers, judges and prosecutors, have been arbitrarily dismissed. The two leaders and eleven other MPs from the pro-Kurdish Peoples’ Democratic Party, the second opposition party in parliament, are in jail, and in 75 municipalities in the southeast have been taken over by government-appointed trustees after the elected mayors were arrested.

These alarming developments have been facilitated by a state of emergency declared in July 2016, and extended twice since. Emergency decrees passed during this time have sought to legitimise the suppression of all forms of peaceful dissent and to remove safeguards protecting detainees’ rights. The rule of law in Turkey has been ruthlessly undermined, with increasing pressures on judges, who are frequently subjected to criminal investigation themselves.

The situation for freedom of expression and media freedom has deteriorated sharply under emergency rule and in the run up to the April referendum. According to the independent media platform, P24, there are currently 148 journalists, writers and media workers in jail in Turkey, and 184 media outlets have been arbitrarily shut down since July 2016. Hundreds of civil society organisations have also been closed. Journalists are frequently subjected to extended pre-trial detention, without seeing an indictment outlining the charges and evidence against them for several months.

International pressure does have an impact on Turkey; seemingly as an effort to avoid an urgent debate on the situation scheduled for 24 January at the Parliamentary Assembly of the Council of Europe, the Turkish government introduced two executive decrees on 23 January 2017, aimed at addressing a number of international concerns on the rule of law under the state of emergency. Decree 684 reduced the maximum detention in police custody from thirty to seven days, and improved access to lawyers for detainees, while decree 685 introduced a “complaints commission” ostensibly to address complaints regarding state of emergency practices. While the former has been implemented, the proposed make up and functioning of the latter raise concerns that it is no more than a fig leaf delaying access to effective remedies and to the European Court of Human Rights (ECtHR).

To facilitate genuine human rights improvements, Turkey’s international partners must maintain pressure on Ankara, while ensuring this is accompanied by ongoing scrutiny of the situation that enables meaningful reform.

Freedom of expression and information priorities

Arrests of journalists under the state of emergency

States must call on Turkey to immediately release without charge all arbitrarily detained journalists, absent individualised evidence of involvement in a crime, in line with the commitments of States in UN HRC Resolution 33/2 on the safety of journalists.

Trials of journalists on charges pre-dating the coup attempt

Countless journalists are also facing charges in relation to their work as journalists pre-dating the coup attempt. The indictments and charges are frequently incoherent and inconsistent, with little or no supporting evidence apart from the content of the news articles the journalist wrote. This indicates political motivations behind prosecutions and the lack of judicial independence, reflecting concerns raised by Council of Europe Commissioner for Human Rights, Nils Muiznieks, on 15 February.

Many journalists are charged on the basis of the Penal Code, which makes it an offence to establish or command an armed organisation, or be a member thereof (Article 314), or under provisions that prohibit committing offences on behalf of a prohibited organisation (regardless of membership) or to make propaganda for a prohibited organisation, including through the media (Articles 220, 227 and 228). Often, indictments will allege affiliations with multiple organisations that have contradictory aims, such as FETÖ, the Kurdistan Workers’ Party (PKK), and the Islamic State.

The following cases are illustrative of the experiences of journalists currently facing trial:

States must call on Turkey to reform the anti-terror legislation, in particular the Penal Code, cease the judicial harassment of journalists and human rights defenders, and take immediate steps to restore the independence of the judiciary, including through cooperation with the Council of Europe and the Organisation for Security and Cooperation in Europe (OSCE).

The space for freedom of expression and critical news reporting has significantly shrunk under the State of Emergency since July 2016, and consequently the public has been denied access to information on issues of public concern, in particular of independent and pluralistic perspectives in the media. This is particularly concerning in the run up to the referendum in April, which will decide on Turkey’s political structure.

At least 180 media outlets and publishing houses have been closed by executive decree under the state of emergency, which according to the Turkish Journalists’ Association, left approximately 2500 journalists jobless.[7] There are now only four national print newspapers remaining who take an editorial line which is critical of the government; Cumhuriyet, Evrensel, BirGun and Özgürlükce Demokrasi (the successor of Özgür Gündem). There is only one remaining national television channel which takes a critical line on the government, HalkTV, which is closely affiliated with the main opposition party, the Republican People’s Party (CHP).

The closures have disproportionately affected Kurdish media outlets; very few journalists are now able to report news on the conflict in the South-East of the country. Those who do report from there are working under increasingly dangerous conditions without press cards or official recognition.

It has become habitual for the Turkish government to immediately request a broadcasting ban from the courts after a terrorist attack. Broadcasting bans were issued after the suicide bombings in Suruç on 20 July 2015, in Ankara on 10 October 2015 and 13 March 2016 and in İstanbul on 12 January and 29 June 2016. The speed at which the broadcasting ban was issued after the terrorist bomb in İstanbul led the leader of the opposition, Kılıçdaroğlu, to say that “the broadcasting bans arrive faster than the ambulances in Turkey”.  Under the state of emergency, broadcasting bans have continued; a ban was issued immediately after the murder of the Russian
envoy in December 2016 and after the terrorist attack on a nightclub on 31 December. In both cases, people also reported that access to social media platforms was “throttled” i.e. slowed down so as to make the sites unusable.

States must call on Turkey to end of the state of emergency, reverse executive decrees closing media outlets, and cease issuing broadcasting bans on issues of legitimate public concern. Crucially, ahead of the April Constitutional referendum and in lieu of institutional and legal reforms, the government must guarantee media and editorial freedom, and ensure equal broadcasting time for both campaigns.