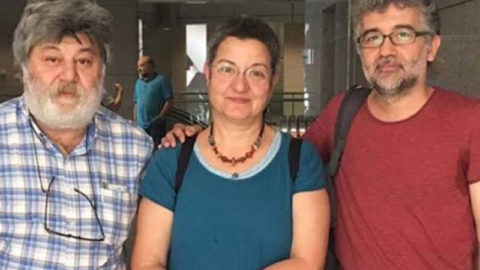 On the eve of the start of the trial of RSF’s Turkey representative, Erol Önderoğlu, who is facing a possible 14-year prison sentence, 17 press freedom and human rights NGOs have issued a joint statement in support of this journalist and staunch defender of the right to inform in Turkey.

The below-named freedom of expression, human rights and journalists’ organisations  denounce the judicial persecution of journalists in Turkey, and especially the journalist Erol Önderoğlu, who represents the press freedom watchdog Reporters without Borders (RSF) in the country. Erol faces a lengthy jail sentence for his work defending media pluralism.

Standing trial for having participated in the “Editors-in-Chief on Watch” campaign in solidarity with the closed Özgür Gündem newspaper in 2016, Erol Önderoğlu and his two co-defendants, the physician and human rights defender Şebnem Korur Fincancı and writer and journalist Ahmet Nesin, were originally acquitted after three years of persecution. However, on 3 November 2020, the 3rd Penal Chamber of the Court of Appeals of Istanbul reversed the ruling of acquittal given on 17 July 2019.

Consequently, on the 3rd of February, Mr. Önderoğlu and his co-defendants will once again be tried on charges of “propagandizing for a terrorist organization”, “openly inciting to commit crimes” and “praising the crime and the criminal”. They face these spurious charges solely for guest editing the aforementioned newspaper, which was forcibly closed in 2016 in the media crackdown following the attempted coup. Together, they face up to 14 and a half years in prison, under the Anti-Terror Law No. 3713 and the Penal Code of Turkey.

The retrial of this tireless free speech advocate is a dreadful illustration of the witch-hunt waged by President Erdoğan’s government against its media critics. Currently, Turkey is Europe’s biggest jailer of professional journalists, and the few remaining independent media outlets are continuously harassed and marginalized, while detained journalists and closed media are denied any effective legal recourse.

We denounce the ongoing detention and prosecution of journalists in Turkey as an autocratic attempt to silence all dissenting voices and to prevent independent journalists from carrying out their profession.

We offer our support and solidarity to our colleague Erol Önderoğlu who has been prosecuted for the past four years in Turkey, and we call on the Turkish government to drop the charges against Erol Önderoğlu and his two co-defendants, Şebnem Korur Fincancı and Ahmet Nesin, and cease such oppression of journalists, academics and writers.

“The judicial harassment of Erol is part of a broad crackdown on freedom of expression in Turkey, and is emblematic of the abuse of law we’re seeing meted out against hundreds of journalists and civil society actors in the country. We stand by him in solidarity and call for his charges, and the charges of his co-defendants Şebnem Korur Fincancı and Ahmet Nesin, to be immediately dropped,” said the head of Europe and Central Asia Programme, ARTICLE 19, Sarah Clarke.

“Erol has been doing an important job of defending press freedom in Turkey, and his work should be appreciated, not punished. Turkish authorities should drop the charges against him, allow him to work in the country safely and take measures to improve Turkey’s devastating press freedom record,” said CPJ’s Europe and Central Asia program coordinator, Gulnoza Said.

“The fact that Erol continues to be persecuted for an act of collegial solidarity is a damning indictment of the state of the rule of law in Turkey. We stand with him and demand an end to this relentless judicial harassment,” said ECPMF’s Advocacy Officer, Laurens Hueting.

“Erol has always made sure to collaborate on the ground with the journalists’ unions and associations affiliated to the EFJ in Turkey. We consider that the judicial harassment he faces is in fact aimed at intimidating all journalists in the country. We stand with him,” said EFJ’s General Secretary, Ricardo Gutierrez.

“The cruelty in Erol Önderoglu being acquitted from spurious charges only to be prosecuted again for the same is immeasurable and illustrative of a faulty and vindictive Turkish judiciary. The silencing of committed journalists like Önderoglu needs to cease. Be clear that the ongoing harassment and persecution of journalists is the big story the world knows and the one Turkish authorities need to consider rewriting by ending these attacks,” said IFEX Executive Director, Annie Game.

“While this case is about Erol, its impact will be felt by every independent journalist and every citizen in Turkey. If the authorities succeed in silencing journalists such as Erol then citizens will be denied their right to information and democracy suffers. Drop the charges now!”  said IFJ General Secretary, Anthony Bellanger.

“The Turkish authorities’ unrepentant pursuit of Erol, Şebnem, and Ahmet is indicative of the appalling lengths to which they are willing to go in order to silence dissent. We are urging the authorities to fully and unconditionally respect the fundamental rights of the three human rights defenders – nothing more, nothing less,” said the Senior Policy Research and Advocacy Officer at Index on Censorship, Jessica Ní Mhainín.

“The continued legal harassment of Erol Önderoğlu and his fellow defendants underscores yet again that the Turkish judicial system has been instrumentalized to serve the government’s crackdown on press freedom and freedom of expression. This is an outrageous, meritless case whose only purpose is to intimidate those who speak out in defence of fundamental rights in Turkey. IPI and its members around the world stand in solidarity with Erol,” said IPI Deputy Director, Scott Griffen.

“Our colleague, Erol Önderoğlu, has for many years been at the forefront of the defence for freedom of expression in Turkey. This he has carried out with integrity, impartiality and objectivity. That he faces imprisonment solely for his defence of free media is a deplorable denial of the very rights he has fought to protect,” said the Europe Regional Program Coordinator at PEN International, Sara Whyatt.

“Erol Onderoglu should be the honor of Turkey. Instead, he is prosecuted for arbitrarily reasons and even harassed. No country can be considered a democracy when its government and judiciary fight human rights defenders like this,” said RSF’s secretary general, Christophe Deloire.