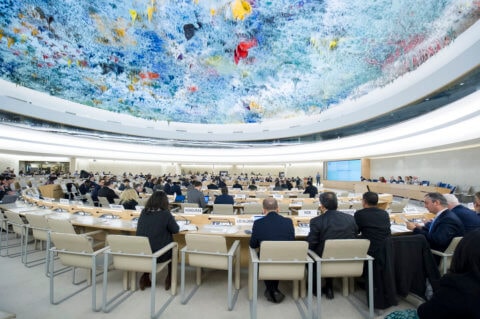 On 3 September 2019, ARTICLE 19 sent a joint letter to the UN Human Rights Council raising concerns for Turkey’s on-going crackdown on journalists and media outlets. The letter urges States to intervene during the 42nd regular session of the HRC in September 2019, in the forum of the UN Working Group on Arbitrary Detention.

138 journalists and media workers are currently imprisoned in Turkey. Hundreds more are on trial on manifestly unfounded terrorism charges.  The letter, signed by 18 human rights and journalists’ organisations, calls on delegations to speak out and address Turkey’s repressive campaign against freedom of expression. The signing organisations also stress that the Human Rights Council should not ignore such a blatant violation of Turkey’s international human rights law obligations and commitments.

In August 2019, ARTICLE 19 made a joint submission to the Universal Periodic Review of Turkey and warned the United Nations about Turkey’s rapidly deteriorating human rights situation, and pushed for action.

Ahead of the 42nd  regular session of the UN Human Rights Council (HRC), we, the undersigned human rights and journalists’ organisations, call on your delegation to speak out and address the Turkish government’s repressive campaign against freedom of expression. The Council must not continue to ignore such a blatant violation of Turkey’s international human rights law obligations and commitments.

The situation for freedom of expression in Turkey is now critical, as outlined in a joint submission on freedom of expression to the UPR of Turkey by civil society. ]The right to hold and express dissenting opinions and to access information has been systematically undermined by the Turkish government in an intensive crackdown on journalists and independent media, academics, civil society, oppositional voices and the judiciary. Since 2016, the human rights situation in Turkey has steeply declined, facilitated by the misuse of sweeping emergency powers and the concentration of executive power. At the time of writing, at least 138 journalists and media workers are imprisoned, with hundreds more currently on trial facing lengthy sentences on manifestly unfounded terrorism charges. At least 170 media outlets have been closed down over claims they spread “terrorist propaganda”. Access to thousands of websites and platforms has been blocked after a government decree authorising removals and blockages of websites without judicial oversight.

This catalogue of human rights violations (see Appendix) is an affront not only to the Turkish Constitution and international obligations, but also flies in the face of the standards this Council has adopted, in particular on the Safety of Journalists (HRC Res 39/6) and on the Internet and Human Rights (HRC Res 38/7).

In a follow-up report to the HRC in June 2019, the Special Rapporteur on freedom of expression informed the Council that there had been a “lack of effective efforts by the State to implement the recommendations made” following his November 2016 country visit. In several areas, he found that the government was taking action “directly contrary” to the recommendations madeAhead of Turkey’s upcoming Universal Periodic Review,the time to put the government on notice that it must change course, or face an intensification in international scrutiny is now.

All Member and Observer States committed to media freedom, democracy and the rule of law, must speak out during the Council’s 42nd Session.

Background on freedom of expression issues in Turkey

In July 2016, a state of emergency was imposed in Turkey after a failed coup attempt, which was followed by mass arrests and mass dismissals of judges, prosecutors and civil servants perceived to be in opposition to the government. Many of those arrested are reported to have been subject to torture and ill-treatment in detention and have faced politicised trials falling well below fair trial standards. Since then, President Erdoğan’s government has sought to tighten its grip, shutting down media outlets and imprisoning journalists on an alarming scale. Although the state of emergency was formally lifted in July 2018, legal amendments have effectively entrenched the broad powers enabled during the state of emergency into the legal framework, reducing legislative and judicial oversight of the executive, to enable an increasingly authoritarian regime. Constitutional amendments following the 2017 referendum further increased the powers of the President, while other reforms have directly limited the independence of the judicial appointments body, the Council of Judges and Prosecutors, from the executive.

Challenges to the Erdoğan regime brought by Turkey’s 2019 local elections, with opposition parties winning mayoral seats in crucial cities such as Istanbul, Ankara and Izmir, brought hope of reform, but the regime’s repression of dissent has continued, most recently with new efforts to severely restrict access to online content on the country and the continued arrest and mistreatment of journalists.

Crackdown on journalists and media

The arbitrary detention of hundreds of journalists, academics and human rights defenders is a matter of grave concern: in the last three years, Turkey has been the world’s most prolific jailor of journalists. In 2018 alone, 59 journalists were sentenced to a collective total of 419 years and 8 months in prison for “being a member of a terrorist organisation”, “managing a terrorist organisation” or “aiding a terrorist organisation”. Trumped up terrorism charges are routinely used against journalists expressing critical or dissenting opinions, and result in lengthy prison terms. In February 2018, UN Special Rapporteur on the right to freedom of expression, David Kaye, and Representative on Media Freedom for the Organization for Security and Co-operation in Europe, Harlem Désir, expressed deep concern in relation to an “unprecedented assault on free speech” with regards to the life sentences imposed on journalists Ahmet Altan, Mehmet Altan, Nazlı Ilıcak and others. Defendants in this case were convicted for “attempting to overthrow the constitutional order” initially on the basis of “subliminal messages” allegedly sent on a TV channel the night before the 2016 attempted coup.

Independent media has been all but wiped out. Under State of Emergency Decrees at least 170 media outlets including publishing houses, newspapers and magazines, news agencies, TV stations and radios were closed. Only 21 of these have been able to reopen, some of them only on the basis that they agree to major changes in their management boards.Many independent outlets have been permanently silenced, through the liquidation and expropriation of all their assets.

The recent acquittal of Erol Önderoğlu, Şebnem Korur Fincancı and Ahmet Nesinin the Özgür Gündemeditors for a daycase, and the May 2019 Constitutional Court decision recognising the violation of the right to freedom of expression in individual applications of the Academics for Peacecases, have been positive. However, these developments have been counterbalanced by the attacks against civil society in the ongoing trial against 16 leading civil society figures involved the Gezi Park case, which sees the continuation of two years’ pre-trial detention of Osman Kavala.

These arrests and trials are taking place in the context of the absolute collapse of the rule of law in the country, where there is no prospect of a fair trial for defendants. Turkey’s judicial independence has been severely damaged by increasing governmental pressure on the judiciary, with judges in fear of reprisals if they fail to rule in favour of the government in politically motivated trials.

Indictments have lacked credible evidence to justify prosecution, often containing factual inaccuracies and absurd claims. Prosecutors routinely fail to disclose evidence to defendants or their legal counsel, and evidence obtained through torture has been deemed admissible. The vast majority of cases have relied exclusively on individuals’ legitimate journalistic work, or human rights work, as evidence of membership or promotion of a terrorist organisation, or involvement in the coup attempt.