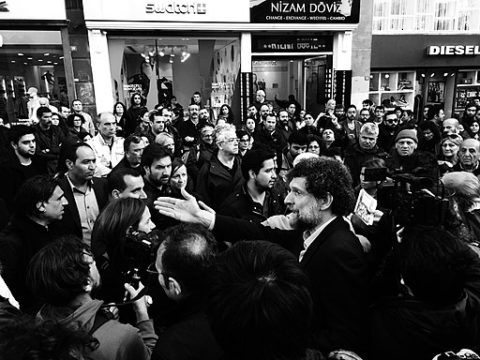 Norwegian PEN, PEN International and ARTICLE 19 condemn the cruel decision to open a new criminal investigation against civil society leader and publisher Osman Kavala, immediately after his acquittal in the ‘Gezi Park’ trial yesterday. The European Court of Human Rights has previously found that his 928-day arbitrary detention violated his right to freedom of expression. The new charges against Kavala should be immediately dropped and the Turkish authorities must cease the harassment of civil society.

Just hours after his acquittal yesterday in the ‘Gezi Park’ case, the Public Prosecutor announced that they were appealing the acquittal and opening a new investigation against Osman Kavala for ‘attempting to overthrow the constitutional order through violence and force’ under Article 309 of the Turkish Penal Code in connection with the 2016 coup attempt. Kavala was reportedly taken to police detention immediately upon release from prison last night. He is due to stand before a judge today, who will decide on whether he should be placed in pre-trial detention on the new charges.

‘Norwegian PEN are thoroughly disgusted by the dirty tactic of immediately re-arresting an innocent man who was already deprived of his freedom for so long.  It is obvious to those who follow events in Turkey that there is no connection whatsoever between the constitutionally-permitted protests of Gezi Park and the attempted-coup of July 2016.’

‘The latest turn of events could not be more painful. Re-arresting Osman Kavala hours after his acquittal is a cruel and callous move. Kavala should be home with his friends and family yet, after two and a half years, he still languishes behind bars. The Turkish authorities must end their pervasive crackdown on media freedom, civil society and dissenting voices once and for all. The PEN community continues to stand with Kavala and forcefully calls for his immediate and unconditional release.’

‘Acquitting Kavala only to re-arrest him hours later is cruel and arbitrary. This is a pattern of behaviour we are beginning to see with the Turkish authorities: Ahmet Altan, Selahattin Demirtaş, Atilla Taş, Murat Aksoy are just some of the other individuals who have been targeted by this malicious behaviour on the part of the authorities. Hiding behind legal technicalities to avoid implementing judgments from the European Court of Human Rights cannot mask that this is essentially judicial harassment aimed at intimidating the individuals involved, and society at large, into silence.”

Nine defendants were acquitted in the ‘Gezi Park’ trial yesterday in Istanbul, while the cases of the seven defendants residing outside Turkey were separated from the case file. The judgment, while welcome, did not reflect an assessment of the evidence presented in the indictment or during the trial and came after lengthy proceedings and lengthy pretrial detention of Kavala and Yığıt Aksakoğlu (who was also held in pre-trial detention for seven months), which were manifestly designed to silence the defendants and civil society at large. The result therefore failed to restore confidence in the independence and impartiality of the Turkish judiciary.

Court observers who monitored the eight hearings of the trial, including Norwegian PEN, noted the lack of adherence to court procedure and the Turkish penal code itself, in a trial instigated on the basis of a 657-page indictment that was disturbingly devoid of any clear statement of facts or evidence of a crime. The Bar Human Rights Committee of England and Wales, which observed the trial with the support of ARTICLE 19, characterized the trial as a “meritless prosecution that has little to do with ordinary and proper trial procedures”. In its judgment of 10 December 2019 in the Kavala case, the European Court of Human Rights noted that the activities listed as evidence refer to the “ordinary and legitimate activities on the part of a human rights defender and the leader of an NGO”. Two police witnesses heard during the trial had not been able identify the defendants as having participated in Gezi protests at all.

At the final hearing yesterday, defence lawyers at one point had to form a human shield around a colleague to prevent him being taken out of the courtroom by military force. This had followed the judge’s demand that the defendants make their final statements before the lawyers had called any of their witnesses or expounded their legal arguments.

When order was restored to the room, the judicial panel returned to read out the final verdict in the case.  This was to acquit all nine defendants present, to release Kavala from detention and to separate the case file of those defendants abroad and request that they return to Turkey to stand trial.

The defendants had been tried on charges of attempting to overthrow the government of Turkey by force and violence during the spontaneous Gezi protests that erupted in the country in 2013. Last week, the prosecutor in the case requested aggravated life imprisonment for defendants Osman Kavala, Mucella Yapıcı and Yığıt Aksakoğlu for ‘attempting to overthrow the government through violence and force’. He also requested that Çiğdem Mater Utku, Ali Hakan Altınay, Mine Özerden, Şerafettin Can Atalay, Tayfun Kahraman and Yiğit Ali Ekmekçi be convicted as ‘persons who assisted the commission of the offence’. Finally, he demanded that those defendants in exile outside Turkey return to face trial.

While welcome, the acquittals came as a surprise given that the judicial panel had not allowed any of the demands of the defence lawyers but had acceded to all those of the prosecution. Moreover, they appeared to have disregarded the European Court of Human Rights’ decision of December 2019 that demanded Osman Kavala’s immediate release from prison.

We repeat our call for the Turkish authorities to immediately drop all charges against Osman Kavala and to cease the harassment of civil society.