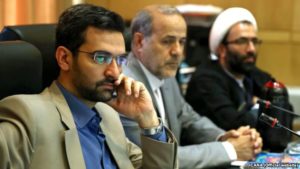 President Hassan Rouhani’s appointment of hardliners to cabinet positions since his recent re-election is a worrying confirmation that promises to improve freedoms online will go unfulfilled.

This brief covers developments from mid- June to the end of August 2017 and exemplifies the concerning situation for Internet freedoms in Iran.

The recent appointment of Mohammad-Javad Azari Jahromi to Minister of Information Communications and Technology has sparked controversy. His appointment follows a career spent in the Ministry of Intelligence, where he was personally involved in building surveillance infrastructure, and directly took part in interrogations and abuse of individuals involved in the 2009 Green Movement protests.

Already, there have been startling announcements which deepen concerns for freedoms online, including the new Minister’s attitude of complicity with the hard-line Judiciary’s attempts to censor and repress activity on Telegram, a popular social media and messaging platform.

As arrests and intimidation of online journalists and other Internet users continue, ARTICLE 19 urges Iran’s new cabinet to act on the promises and platform on which Rouhani was elected, and pressure the nation’s hard-line authorities to respect online freedoms.

ARTICLE 19 has been following government efforts to centralise data to Iran throughout the “Tightening the Net” reports and briefings, starting with the plans for the National Information Network1, built to bring and maintain the majority of online content, servers, data, and networks inside the country. This goal has become a particular concern during recent months, after the Supreme Council of Cyberspace released a regulatory document, writing into law the efforts to put all data in the hands of the Iranian government.

ARTICLE 19 continues to demand that Iran repeal vague laws and policies which erode the rights to freedom of expression and privacy which are guaranteed within Iran’s constitution.

In this briefing, we also highlight the responsibility of technology companies and platforms, such as Telegram and Apple, to remain transparent about their policies, regarding cooperation with the Iranian government, and efforts to ensure continued access to information for Iranian users.