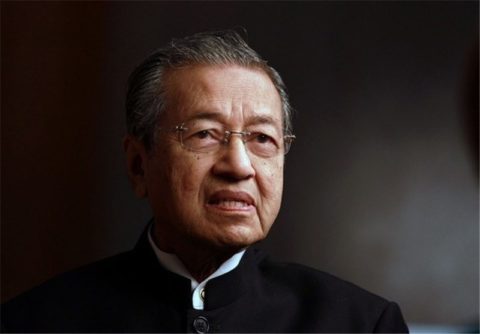 In October, as nations struggled to contain the COVID-19 pandemic, the world was once again shocked by terrorist attacks in France, namely the killing of the teacher Samuel Paty in connection with his use of caricatures of the Prophet during a classroom lesson and the knife attacks at a church in Nice.

Malaysia’s two-time former Premier, Mahathir Mohamad commented on these events with a number of concerning posts, endorsing the attacks and seemingly encouraging Muslims to kill French people. Some of these posts were taken down by both Facebook and Twitter. Part of Mahathir’s Twitter thread remains accessible.

Undoubtedly, this is an extraordinary ‘out-of-the-ballot-box’ rebuke to the veteran politician that could not be delivered by his peers and voters alike.

With this social-media censure, Mahathir has earned himself a spot on the wall of infamy, alongside American President Donald Trump and Brazilian President Jair Bolsonaro, incumbent heads of state that have faced action by Twitter and Facebook for posts that have violated terms of use. As Malaysians grow more vocal with their protests against disenfranchisement from electoral democracy, interventions by big tech and social media companies emphasise the growing gap between civil society, effective laws governing hate speech and the privileged protection enjoyed by vocal politicians.

Privileged positions and potential for harm

Retreating to his blog as a method of self-defence against the actions of Twitter and Facebook, Mahathir’s retaliation was penned without acknowledging his role as an elected Member of Parliament (MP), an influential political figure who arguably has access to millions of people on Twitter.

It is no mystery that Mahathir’s blog Che Det continues to be his chosen platform for refining his long-developed views on Asian values, gender essentialism, sexism, and his continued opposition to allegedly the monolithic Western world and universal human rights.

Back home in Malaysia, identity politics has made nationhood more complex, adding to growing intolerance among Malaysians. Although Mahathir is known for his opinions on engineering a neoliberal economy and progress, one could never rely on Mahathir to be tough on dismantling systems of oppressions, decreasing hostility between ethnic groups and innovating protections for minorities, as he argues ‘Asian values’ exempt him from these duties.

Occupying a position of privilege and protection as Malaysia’s Prime Minister from 1981, the founder of two raced-based parties championing a brand of identity-based politics, his ideological views on power have rarely met substantial challenge. He is also one of Malaysia’s leading architects of modern systemic racism, the country’s growing reliance on criminal laws to police speech, and the prevalence of self-censorship when it came to discussing Race, Religion and Royalty (3Rs).

Instead of apologising for his social media posts and recognising the dangers of a public figure appearing to condone violence, the MP for Langkawi condemned readers for taking his posts “out of context”.

It is important for all people, especially veteran political leaders, to firmly denounce racism, violence, and hatred. A recognised world leader and an incumbent Member of Parliament influences lawmaking, the opinions of their party members, the youth, the media and the general public. The impact of one callous remark will have far-reaching consequences, in the long term do more harm than good. Public officials, including politicians, have a key role to play in recognising and promptly speaking out against intolerance and discrimination, including instances of hate speech.

We need to talk about minorities and hate speech

It is concerning but unsurprising to note that in Mahathir’s slew of posts he does not confront the burning issues of minority rights, discrimination, ‘hate speech’, and the importance of creating an enabling environment for freedom of speech. He instead builds his narrative on his conception of religion, identity and a monolithic view of the ‘West’.

Minority rights do not figure into Mahathir’s argument and defence of his statement, providing him with a convenient free pass from critically engaging with the French context and providing effective solutions at home.

Discussion on protection of minorities from discrimination and how to address hate speech in this society has never been timelier. The COVID-19 pandemic has demonstrated how minorities, migrants and refugees bear the brunt of exhausted healthcare systems, face increased stigma and have become targets of hate speech.

At the same time, solutions to these problems should not rest on censorship. Too often, censorship of contentious issues or viewpoints fails to address the underlying social roots of the kind of prejudice that undermines the right to equality. The complexity of this issue becomes evident when we analyse that restrictions placed on freedom of expression and information by states have failed to provide space for people to debate and have constructive dialogue because everything is restricted and labelled as “sensitive”. We need to allow more speech, and we must end the restrictive environment so that we can discuss fundamental issues of identity, belonging, systematic discrimination, prejudice and harmful stereotypes. This is a better approach to combat hate speech, racial discrimination and hostile environments affecting minorities.

The UN Special Rapporteur on freedom of religion or belief has identified that intolerance is fuelled by populist political movements that scapegoat marginalised and minority groups, and by hatred in the name of and against persons based on religion. This is exactly what Mahathir does and we call him out for it.

With Malaysia’s vacillating commitment to international human rights law and its existing legal framework, it is pertinent to recognise two factors: first, it is arguable that Mahathir’s statement constitutes incitement to commit acts of violence against others and second, Malaysia’s domestic law, policies and practices are not adequate to deal with this statement.

First, under international human rights standards that Malaysia has yet to ratify, freedom of speech can be restricted under certain narrow circumstances. Restrictions must be provided for by law; in pursuit of a legitimate aim; and necessary and proportionate. States must also prohibit speech that incites to violence, discrimination and hostility. Malaysia legislation falls short of these standards.

Malaysia relies on its antiquated 1948 Sedition Act, a host of widely drafted penal laws and the Communications and Multimedia Act (CMA). A more modern legislation, demarcating the limits of free speech and the protection of people against hate speech, has yet to be seen beyond the walls of Parliament and drafting committees.

In practice, we see these laws prioritising the protection of social institutions, namely the monarchy, religion and the majority ethnic group of the State. The government has declared that any speech that comprises the 3Rs will not be tolerated. The State, through its regulatory body Malaysian Communications and Multimedia Commission (MCMC), has taken steps to censor and criminalise alleged online hate speakers with selective prosecution under the repressive laws like CMA, the Sedition Act and Penal Code.

While Malaysia’s existing legal framework in practice has been solely tasked with the protection of the 3Rs and the protection of ‘national interests’, would we be able to rely on the laws to effectively investigate, prosecute and try Mahathir for the crime of incitement?

Most of the time, problematic laws such as the Sedition Act, CMA and Penal Code are used to restrict legitimate speech that should be protected. These laws also do not comply with the above standards governing restrictions on the right to freedom of expression. The Malaysia government needs to focus on creating an enabling environment for freedom of expression and take steps to ensure that Penal Code provisions relating to incitement comply with the standards set forth in Articles 19(3) and 20(2) of the ICCPR, and on amending or repealing other laws that are inconsistent with the right to freedom of expression. The Malaysian government should also revive efforts to pass comprehensive anti-discrimination legislation in line with international human rights standards.

We must recognise that the actions of Twitter and Facebook taking a stand on Mahathir’s postings before the local authorities had an opportunity to weigh in is a sign that Malaysia’s domestic legal framework has to play catch-up with both the standards of big tech organisations and its international human rights obligations.

Malaysia must sign on to the ICCPR and work towards creating more meaningful spaces for minority rights and public discourse.

Politicians and people in authority should be the first to condemn violence and to use their position and privilege to effect long-lasting change. The appropriate answer to hate speech is not just more speech – but also policies and actions to tackle the causes of inequality in all its forms and colours.

States and public political figures should be leading by example to ensure an environment for open, robust debate and dialogue, including through a free and open internet, in line with the rights to freedom of religion or belief, freedom of opinion and expression, and non-discrimination. States should further encourage initiatives by other stakeholders to promote inclusion, diversity and pluralism, in line with Human Rights Council Resolution 16/18 and the Rabat Plan of Action.