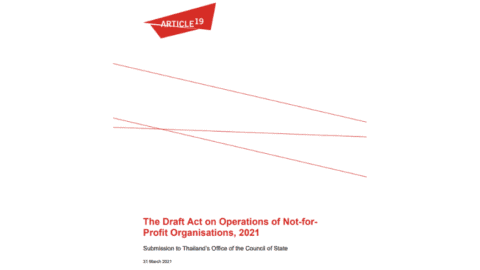 ARTICLE 19 submitted recommendations to Thailand’s Office of the Council of State concerning the Draft Act on Operations of Not-for-Profit Organisations, 2021 (Draft Act). The submission details how the Draft Act would grant the Thai government unfettered authority over the registration of civil society organisations, opening the door to arbitrary application of the law against groups that are critical of the government or take unpopular or controversial opinions.

The Draft Act introduces a process for the registration of civil society organisations, community organisations, and any other non-business group, no matter their size or level of formality. The Office of the Council of State introduced the proposed legislation on 12 March 2021 and accepted public consultation on the Draft Act until 31 March 2021.

The Office of the Council of State has called for public consultation on the Draft Act, but only provided a window of two weeks for comments to be submitted—not enough time for the public to fully vet the proposed legislation. After this legal review process, the Draft Act will be resubmitted to the Cabinet, then presented to the Parliament.

Thailand’s proposed civil society registration scheme is incompatible with international human rights standards. The Thai government should immediately withdraw the Draft Act from consideration. The Draft Act should not serve as a point of reference for any further efforts to regulate non-governmental organisations (NGOs) or Thai civil society. Rather, new legislative or regulatory efforts should be focused on promoting an enabling environment for civil society and the enjoyment of the right to freedom of association in line with international human rights standards.