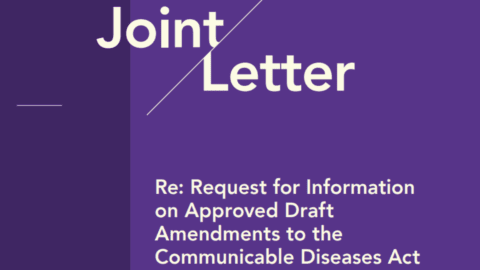 This joint open letter was sent to Prime Minister Prayut Chan-o-cha on 11 November 2021.

Re: Request for Information on Approved Draft Amendments to the Communicable Diseases Act

We, the 10 undersigned organizations, request your government to publish information on the draft amendments to the 2015 Communicable Diseases Act recently approved by the Cabinet and ensure the amendments align with international human rights law.

On September 21, 2021, the Thai Cabinet approved draft amendments to the Communicable Diseases Act. However, information on Cabinet-approved draft legislation, including the “Approval of the Resolution” and detailed summary of the law and impacts of the law, is still not available on the Secretariat of the Cabinet’s website. Notably, the Cabinet has published information on other draft legislation approved by the Cabinet on September 21, raising questions as to why information on the Communicable Diseases Act is being withheld.

We urge the Thai government to follow the guidance provided by the United Nations Office of the High Commissioner for Human Rights (OHCHR) on COVID-19 related responses. The guidance provides that “sufficient information about emergency legislation and measures should be communicated swiftly and in all official languages of the State . . . and in an accessible manner so the public at large is aware of the new legal rules and can conduct themselves accordingly.”

Earlier this year, the Ministry of Public Health held a public consultation on an earlier version of the draft amendments. Concerns were raised about overly broad and unchecked powers provided to the government. For example, the earlier version of the draft amendment stated that the National Communicable Diseases Committee may implement measures to “prohibit [the public] . . . from organizing any activity which may . . . give rise to the outbreak of a serious communicable disease or may prohibit any public gathering or the gathering of individuals exceeding a specified limit.”

During a press conference on September 21, the deputy government spokesperson indicated that the Communicable Diseases Act may soon become the main legislation to regulate the country’s response to the COVID-19 pandemic, replacing the Emergency Decree, which was recently extended for the fourteenth time until November 30. While it is welcome that the COVID-19-related Emergency Decree may no longer be in effect, we are concerned that the amended Communicable Diseases Act may indefinitely retain and solidify the Emergency Decree’s repressive measures that restrict the right to freedom of peaceful assembly and expression.

Since the declaration of a nationwide state-of-emergency on March 25, 2020, Thai authorities have reportedly arrested and charged more than 1,330 protesters. In many of these cases, authorities targeted critics and activists under the guise of the state-of-emergency orders. Moreover, detaining people for violating COVID-19 related restrictions paradoxically increases the risk of the spread of the virus by placing people in often-overcrowded and unsanitary detention centers. Those charged under the Emergency Decree face up to two years in prison and/or a maximum fine of 40,000 Thai Baht (US$1,200).

International human rights law recognizes that in the context of serious public health threats and public emergencies such as the COVID-19 pandemic, an effective response may require temporary restrictions on some rights, including the rights to freedom of expression and assembly. However, such restrictions need to have a legal basis, be strictly necessary and proportionate to achieve a legitimate aim specified by international human rights law, and be neither arbitrary nor discriminatory in application. They should be of limited duration and subject to review.

Thank you for your attention to the issues and recommendations raised in this letter. We would welcome learning what actions you have taken to address this important matter.