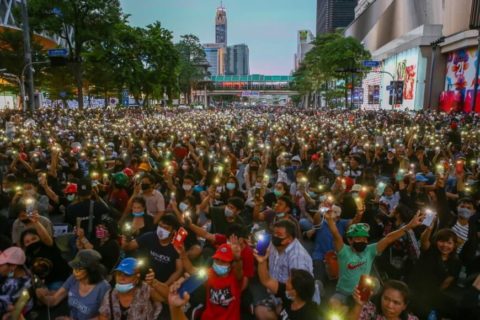 Thai authorities used excessive force against pro-democracy protesters and failed to prevent violence by counter-protesters yesterday, leading to dozens of injuries, said ARTICLE 19. The Thai government must take immediate steps to facilitate the enjoyment of the right to protest in line with international human rights standards.

“The police have failed their duty to the Thai people,” said Matthew Bugher, ARTICLE 19’s Head of Asia Programme. “Over the past month, the police have repeatedly disregarded human rights standards and best practices in the policing of assemblies.”

On Tuesday, pro-democracy protesters gathered on streets approaching the Thai Parliament building while MPs considered proposals to amend the Constitution. One proposal, backed by the signatures of more than 100,000 Thai citizens, would open the door to amendments touching on the institution of the monarchy.

Around 3pm, police forces deployed water cannons and tear gas against the protesters after they attempted to breach a razor wire barrier blocking a road leading to the Parliament building. Until early evening, protesters clashed with police officers in two separate locations in the area. The police repeatedly used water cannons and tear gas to push back the protesters, who responded by throwing smoke bombs and paint at the lines of police.

Journalists behind police lines reported police officers carrying guns that fire rubber bullets. There is no clear evidence that the police fired the weapons, and police officials denied their use during yesterday’s protest.

Pro-monarchy counter-protesters wearing yellow shirts to symbolise their loyalty to the monarchy also gathered in the area and clashed with the pro-democracy protesters. Initially, riot police separated the two groups. However, video posted on social media later showed police officers informing the royalist protesters that they would withdraw and seconds later vacating their position between the two groups. During the ensuing skirmishes, royalists were filmed throwing rocks and wielding clubs. Live broadcasts included sounds that appeared to be gunfire.

On Tuesday evening, Erawan Medical Centre reported injuries to at least 55 protesters, including six with gunshot wounds. Some of those treated at the hospital were suffering from exposure to tear gas. The injured included a kindergartener and elementary school student.

In recent weeks, Thai authorities have at times responded to the growing youth-led protest movement with excessive force. On 16 October, riot police used water cannons against protesters, at one point using water containing chemical irritants. On 8 November, authorities again deployed water cannons against protesters attempting to deliver letters to the royal palace. Police officers have routinely been photographed in plain yellow shirts, making it difficult to distinguish them from pro-monarchy protesters.

In its General Comment No. 37, the Human Rights Committee emphasized that tear gas and water cannons should be used with care and only in exceptional circumstances. The UN Human Rights Guidance on Less-Lethal Weapons in Law Enforcement specifies that water cannons, tear gas or chemical irritants should only be used after law enforcement personnel have sought to ‘identify and isolate any violent individuals separately from the main assembly’. Water cannons should only be used where ‘there is a significant likelihood of loss of life, serious injury, or widespread destruction of property’ and only after a warning.

The Human Rights Committee has further noted that States must protect protesters ‘against possible abuse by non-State actors, such as interference or violence by other members of the public, counter-demonstrators and private security providers.’

In October 2020, ARTICLE 19 and Thai Lawyers for Human Rights published a briefing on violations of the right to freedom of expression and peaceful assembly during the 2020 youth-led protest movement. The briefing highlighted the illegitimate use of emergency measures, attacks on the media, the excessive use of force by police, and the harassment and obstruction of protesters.

At the time of publication, thousands of pro-democracy protesters had assembled in central Bangkok.

“It doesn’t appear that the protest movement will lose momentum anytime soon,” said Bugher. “Thai authorities need to re-focus their strategy on engagement and facilitation of assemblies, rather than taking actions that send people to the hospital.”