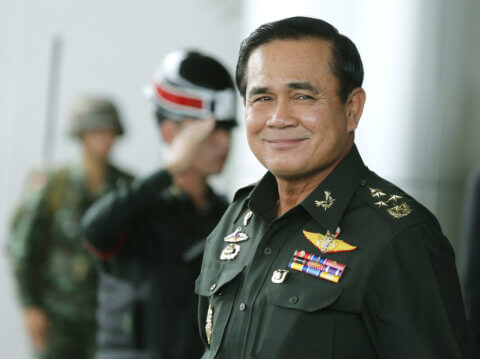 Thai army chief and junta head General Prayuth Chan-ocha smile as he leave after the meeting of the 2015 national budget at the Army Club in Bangkok, Thailand, 13 June 2014. (c) EPA/NARONG SANGNAK

In May 2018, 15 pro-democracy activists were arrested and charged for protesting against continued military rule in Thailand, and calling for democratic elections. ARTICLE 19, CIVICUS, and the Asia Democracy Network have written to Prime Minister Prayuth Chan-ocha calling for the activists to be released, and for an end to the repression of protests and those exercising their right to freedom of expression in the country.

Re: Concerns regarding arrest and prosecution of peaceful protesters

We are writing to you with regards to the recent arrest and charging of pro-democracy activists for their participation in a peaceful protest in Bangkok on 22 May 2018, the fourth anniversary of the military coup in Thailand. These individuals were part of a group of hundreds of protesters who were calling for an end to military rule and for elections to be held by November 2018, in line with commitments previously made by your government.

15 individuals were arrested on the day of the protest and subsequently charged with various offences including violations of Penal Code Sections 116 (sedition), 215 (assemblies leading to “breach of the peace”) and 216 (refusal to disperse). They are also facing charges under Article 12 of the Head of the NCPO Order No. 3/2558, which prohibits “political gatherings of five or more persons”, the Road Traffic Act, and the Public Assembly Act.

On 24 May, after being detained for two nights, the 15 activists were brought to the Bangkok Criminal Court and granted bail of 100,000 Thai Baht per person (approximately USD 3,100). The court also imposed restrictions prohibiting the activists from organising or participating in further protests.

On 29 May, authorities issued summons to at least 47 additional individuals present during the protest, including a staff member from Thai Lawyers for Human Rights who was on hand to monitor the event. This group of individuals will learn the nature of the charges they face when they report to a Bangkok police station on 7 June.

The arrest and charging of the protesters clearly contravene Thailand’s obligations under the International Covenant on Civil and Political Rights (ICCPR), as do the restrictions placed on the future activities of these individuals.

After four years of military rule in Thailand, government authorities continue to arbitrarily arrest, detain and prosecute peaceful protesters and government critics under an array of laws including those used to charge the 22 May protesters as well as the Computer Crimes Act and Penal Code provisions relating to defamation and offenses against the monarchy. Many pro-democracy activists are subject to charges in multiple criminal cases concerning their protest activities and could face decades of imprisonment, if convicted.

By limiting political activities, curbing public gatherings, monitoring private communications, and stifling public discourse on matters of national interest, authorities are unjustifiably restricting the rights to freedom of expression, association and peaceful assembly. Moreover, these actions have created a fearful environment in which people cannot freely express their opinions, criticize public authorities, or peacefully assemble without risking arrest and prosecution. These human rights violations are taking place in the context of the Thai government’s repeated failure to fulfil promises to hold elections and restore democratic norms.

Therefore, we urge Thai authorities to take the following steps as a matter of priority:

We express our sincere hope that you will consider and support these recommendations. We would be happy to discuss these matters with you or other appropriate officials at any time and offer our support in reforming laws and policies to ensure compliance with international human rights law and standards.