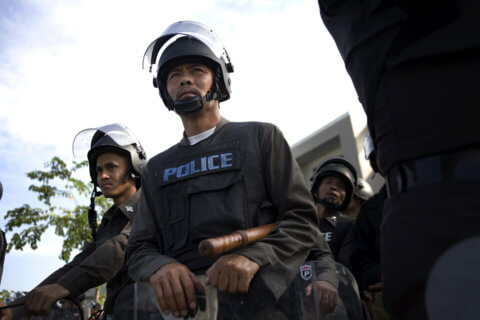 Fresh criminal proceedings against seven pro-democracy activists underscore the continuing suppression of the rights to freedom of expression and assembly by Thailand’s military government, ARTICLE 19 said today. The authorities’ use of sedition charges and a repressive military decree against these activists appears to be aimed at silencing those calling attention to the government’s repeated backtracking on promises to return the country to civilian rule. Thai authorities must immediately withdraw the complaint against these individuals and end cases against others similarly charged for the peaceful exercise of their rights.

“The Thai government has once again demonstrated its commitment to using all the tools at its disposal to stifle political discourse in the country,” said Matthew Bugher, ARTICLE 19’s Head of Asia Programme. “Authorities should be protecting the right of these brave activists to speak their minds, rather using the law as a bludgeon against them.”

According to media reports, a military legal officer today filed a complaint with police alleging that seven individuals—Sirawit Seritiwat, Nutta Mahattana, Rangsiman Rome, Netiwit Chotiphatphaisal, Ekachai Hongkangwan, Arnon Nampa and Sukrid Peansuwan—violated section 116 of the penal code, concerning sedition, and a military decree banning political gatherings of five or more persons. The complaint stems from a 27 January protest in central Bangkok. The seven individuals were joined by dozens of others in protesting a government decision to postpone national elections previously planned for November 2018.

The accused individuals include political activists and a prominent human rights lawyer. Many of the activists already face charges in other cases relating to their peaceful exercise of the rights to freedom of expression and assembly. The activists could face more than seven years’ imprisonment if convicted on the charges filed.

Since coming to power in a May 2014 coup, the military government has imposed severe restrictions on the rights to freedom of expression and assembly and has used existing criminal law provisions to target those calling for respect of human rights or a return to democratic governance. Scores of human rights defenders, journalists and ordinary citizens face criminal charges for expressing their opinions online, in print, in conversation, and on the streets.