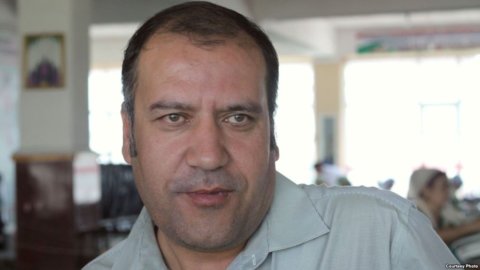 ARTICLE 19 condemns the 5 April 2018 decision to extend the pre-trial detention of independent journalist Khairullo Mirsaidov by a further two months. We call on the government of Tajikistan to immediately release and drop all charges against him, which are clearly an attack on press freedom and intended to silence reporting on corruption.

Mirsaidov, a freelance journalist and former correspondent for independent Tajik media organisation Asia Plus, and Deutsche Welle, has been in pre-trial detention since he was charged on 8 December 2017 with ‘misappropriation of state funds’ (Article 245(4)(b)), ‘incitement to hatred’ (Article 189(2)(g)), ‘forgery’ (Article 340(1)), and ‘false denunciation’ (Article 346(2)(a)) or defamation, under the country’s Criminal Code. He faces 18-20 years’ imprisonment if found guilty under the charges.

“Mirsaidov is in jail simply for speaking out against corruption”, said Katie Morris, Head of Europe and Central Asia at ARTICLE 19. “Despite this, the reaction of the international community has been astonishingly muted. International pressure on Tajikistan is critical if he is to be released”, she added.

Mirsaidov, who also heads the Tajik branch of the International KVN Movement, a state-funded comedy group, was detained following allegations of corruption against a government official. He alleged that the head of the Sughd Department of Youth and Sport, Olim Zohidzoda, had asked him for a bribe. In November 2017, Mirsaidov wrote a public letter to the President of Tajikistan, Emomali Rahmon, the Prosecutor General and the head of the Sughd region informing them that Zohidzoda had demanded $1,000 from the state funding allocated to KVN. He also gave several interviews about the allegations. It is believed that some of the charges may also relate to satirical comments made as part of the comedy group , with the KVN comedy team accused of having “insulted the honour and dignity of the Tajik people.”

Mirsaidov has been held since his arrest on 5 December 2017 under an initial order for two months’ pre-trial detention, which was extended by a further two months in February 2018. He was due to be released last week before the latest order was made. According to a senior aide to the chief prosecutor in Sughd, the province where Mirsaidov is being held, the extension was granted further to a request from the prosecutor to enable them to finalise their investigation.

However, the use of extended pre-trial detention against the journalist and bringing criminal charges for raising issues of corruption represent a serious attack on press freedom. The Human Rights Committee, the treaty body for the ICCPR, which Tajikistan is bound by, has stated that prison sentences related to criminal defamation can never be justified under international law. Likewise, the ICCPR is clear that restrictions on incitement or advocacy of hatred are only a valid limitation on free expression where they are targeted at “incitement to discrimination, hostility or violence”.

The government of Tajikistan uses these type of broadly worded and repressive criminal provisions to intimidate and harass journalists and human rights defenders who are critical of the authorities, with a chilling effect on freedom of expression in the country. In 2016, Article 189 was used in combination with other charges to sentence human rights lawyers Buzurgmehr Yorov and Nuriddin Makhkamov to 23 years in a penal colony and 21 years in prison respectively for providing defense counsel to members of the banned Islamic Renaissance Party of Tajikistan (IRPT).

ARTICLE 19 calls for Mirsaidov’s immediate and unconditional release and for an end to the government of Tajikistan’s targeting of journalists, human rights defenders and their lawyers. We call on the international community to speak out against this injustice and request his release.