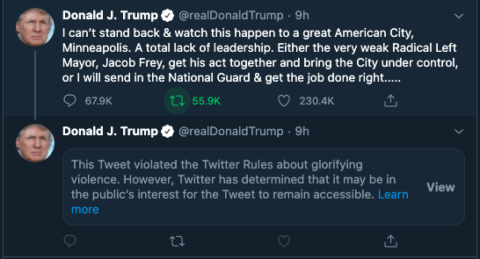 On May 29, Twitter placed a public interest notice on one of US President Donald’s Trump’s tweets, which violated the social media platform’s rules about glorifying violence. The tweet had threatened the use of force in the wake of civil unrest in Minneapolis.

A couple of days ago, Twitter added fact-checking labels to two of the President’s tweets, which claimed that Mail-In voting would lead to widespread fraud.

ARTICLE 19 believes that Twitter acted correctly by placing a notification that these tweets violated Twitter’s rules, while recognising the public interest in not removing them. While the President should be expected to follow the same Community Rules as any other Twitter user, what he has to say is indeed of significant public interest.  Twitter users should be able to see what the US President has to say. Removing the posts completely would restrict the ability of people in the US to hold him to account.

In this case, Twitter has got the balance right. This could be a more positive approach when it comes to regulating the speech of political leaders than simply removing content, as Twitter and Facebook did with posts by President Jair Bolsonaro last month. Bolsonaro had posted a video that promoted the use of the antimalarial drug hydroxychloroquine as a treatment for coronavirus.