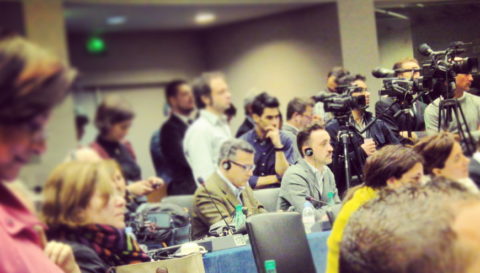 The Media Freedom Rapid Response (MFRR) and partners are writing to condemn the lack of resolute government response to the smear campaign against independent news outlet KRIK. We reiterate our call on the Serbian authorities to take the necessary steps to put a stop to this ongoing threat against these and other independent outlets in Serbia, as well as to sanction such discrediting tactics and threats by all institutional means possible. This is more necessary now than ever, following reports that five of thenine non-state members of the Working Group for the Security and Protection of Journalists have stepped down from the group just three months after its establishment due to the state’s apparent unwillingness to engage with this important threat.

The MFRR and its partners have previously condemned the smear campaign and called for action to ensure the situation does not escalate. We pointed out that the publication of baseless claims linking KRIK to prominent criminals puts them at risk, and we stressed that pro-government media should not be used to further polarisation or to target independent outlets. We fear that, in a climate of endemic impunity for attacks against journalists, this smear campaign, if left unchecked, could invite further threats and acts of violence against KRIK and provide cover for police interference and persecution.
Instead of unequivocally defending journalists, the representatives of the ruling party SNS have continued to attack them. This has had significant implications for the Serbian Government’s commitment to media freedom and the protection of at-risk journalists and media workers. The Working Group, which was established to facilitate coordinated action between relevant state bodies and media outlets, journalist associations and unions to respond to emergent threats to journalists and media workers, can only function as intended when all parties contribute fully and state bodies commit to meaningful action. A breakdown represents not just a failure of the Working Group, but can also actively undermine the media’s trust in the state’s commitment to journalists’ safety and media freedom more broadly.

The key findings of an MFRR fact-finding mission conducted in January and February 2021, led by ARTICLE 19 in cooperation with the Independent Journalists’ Association of Serbia (NUNS), show alarming numbers of verbal and physical attacks and harassment against journalists often perpetrated by public authorities, in particular politicians and police. These threats are often followed by coordinated smear campaigns and online harassment. Accountability for these attacks is insufficient despite the existence of numerous mechanisms at governmental level aimed at enhancing the work of police and prosecutors to investigate violence against journalists and cooperate with media associations and journalists’ organisations.

The decision of five organisations to step back from the Working Group should not be dismissed out of hand. Without their involvement, the legitimacy and efficacy of the Working Group can no longer be guaranteed. The Serbian Government should work to address all concerns in an open and transparent manner. As outlined in the Recommendation of the Committee of Ministers to member States on the protection of journalism and safety of journalists and other media actors (CM/Rec(2016)4), any mechanism focused on the protection of journalists and media workers “should be subject to meaningful civil society oversight”. This oversight is now severely damaged, raising legitimate questions as to the ability of the Working Group to continue functioning as envisaged.

We call on the Serbian authorities to meaningfully engage with journalists and media workers, journalists’ associations and unions, and civil society and to implement itscommitments to improve the safety of journalists, media workers and outlets. This includes a full-throated high-level condemnation of the smear campaign against KRIK and other independent outlets in Serbia and immediately undertaking all necessary steps to stop and sanction these discrediting tactics and threats by all institutional means
possible.

—————————————————-
This letter has been coordinated by the Media Freedom Rapid Response (MFRR), which tracks, monitors and responds to violations of press and media freedom in EU Member States and Candidate Countries. This project provides legal and practical support, public advocacy and information to protect journalists and media workers. The MFRR is organised by a consortium led by the European Centre for Press and Media Freedom (ECPMF) including ARTICLE 19, the European Federation of Journalists
(EFJ), Free Press Unlimited (FPU), the Institute for Applied Informatics at the University of Leipzig (InfAI), International Press Institute (IPI) and CCI/Osservatorio Balcani e Caucaso Transeuropa (OBCT). The project is co-funded by the European Commission. www.mfrr.eu