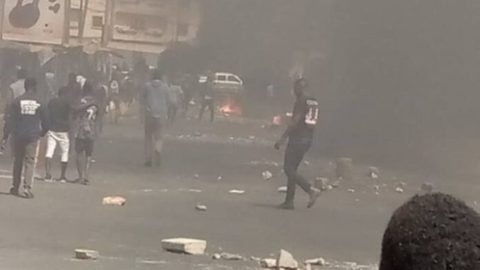 Activists have been arrested, journalists and the media have come under attack and at least five people have died as anti-government protests continue in Senegal. The protests, which started on Wednesday, March 3, quickly progressed to violent riots in the capital Dakar, in Ziguinchor and in other regions.

At least one of those killed was believed to have been shot by security forces.

“ARTICLE 19 is disturbed by the excessive use of force by security agents during protests, as well as by the violence and destruction of public and private property during the riots. As the crisis and the polarisation has deepened, media has become a casualty.

The blocking of two media houses, Walf Fadjiri and Sentv, and the violent attacks on journalists covering the protests, on privately-owned Radio RFM, the Dakaractu media outlet and the government-owned Le Soleil newspaper are all unacceptable and terrifying. Four journalists covering the protest have been injured as a result of violence. Targeting the media during a political crisis is not only dangerous for the safely of journalists, it also increases tensions and the risk of harm. It is a real threat to a free and independent press and to people’s access to information. Democracy cannot function without plurality of the media and diversity of opinion.”

The broadcasting regulator (CNRA) ordered communication signals for Walf Fadjiri and Sentv media outlets to be blocked after they broadcast footage of the unrest.

The internet has also been disrupted, and cybersecurity website NetBlocks said social media and messaging apps were under tight restrictions throughout Friday, March 5.

The protests followed the arrest of opposition figure Ousmane Sonko on March 3 as he prepared to appear in court on allegations of rape. He was escorted by supporters and protesters, some of them threatening violence. He was charged with disturbing public order and participating in unauthorised protests and was remanded in custody.

His supporters insisted the charges were politically motivated and false and that President Macky Sall has been stepping up efforts to remove his rival ahead of the presidential election, which is due to take place in 2024. The government alleges the arrest of and charges against Sonko are a matter of justice and denies claims that it has acted in a politically-motivated manner.

At least four activists and leaders of citizens’ movements have been arrested since March 1. Activist Guy-Marius Sagna, who has been accused of a range of offences including criminal association, threatening disturbance to public order, and organising an insurrectionary movement, is among them.

Amid this escalation of violence and tensions, the government must take concrete measures to strengthen the safety of journalists and protect the independence of the press and public access to information. It must shed light on the circumstances that led to people losing their lives, and immediately release politicians, activists and protesters who have been been detained.

ARTICLE 19 is currently drafting a detailed report outlining attacks on the media, the arrest of activists, and the suppression of protests. The report will be published shortly.