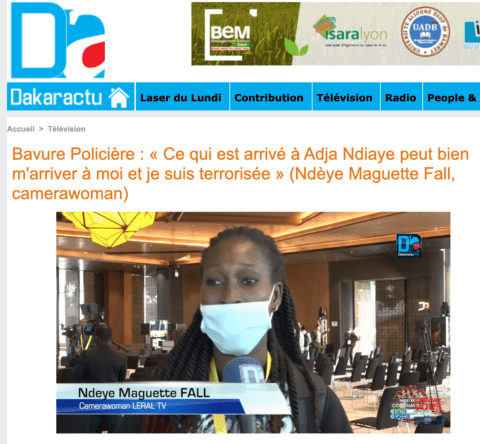 Ndeye Maguette, a tv camerawoman quoted by Dakaractu: "What happened to Adja can happen to me too." She denounced gender based violence.

ARTICLE 19 strongly condemns the assault on camerawoman Adja Ndiaye of the online news site Dakaractu on Monday 28 September at a policestation near the police headquarters while she was carrying out her work. ARTICLE 19 urges the authorities to investigate this incident and end the earlier series of attacks against journalists.

“We are shocked to hear how the police assaulted Adja Ndiaye simply because she was doing her job. We firmly condemn such violence which aims at stifling media freedom. It’s the job of the media to collect and disseminate information. Law enforcement officials should never attack them for performing their duties.”

Regrettably, this attack against a media professional happened on the International Day for Universal Access to Information. There is an urgent need for the authorities to end the cycle of violence against journalists. They must promptly and effectively investigate this incident and take action against those suspected to be responsible.

On Monday 28 September 2020, the reporter Adja Ndiaye went to a police station for a report. As she was about to leave the premises, a police officer stopped her roughly and ordered her to leave. When Adja Ndiaye complained about the treatment, she was physically assaulted, thrown on the ground and subdued by police officers. They also damaged her equipment. Adja Ndiaye had to be admitted to a clinic because of pain in her neck, ribs and elbows.

Confirming to ARTICLE 19, the editor-in-chief of Dakaractu, Samba Ardo Bâ denounced the aggressive treatment of their reporter:

“I firmly condemn the aggression against Adja Ndiaye in a country like Senegal, claiming to be a state governed by the rule of law and freedom of expression. No law enforcement official should harass journalists who carry out their work.”

He also urged the minister of interior, in charge of security to ensure that such attacks do not happen again. Moreover, the authorities should remind the police force that journalism is not a crime and that the job of journalists is to inform the public.

Press freedom under threat in Senegal

ARTICLE 19 raises severe concerns about the worsening state of media freedom in Senegal. In August 2020, the organisation warned about an increase in attacks against journalists since March 2020. These attacks are serious violations of press freedom. The safety of journalists and the fight against impunity are essential to preserving the fundamental right to freedom of expression, guaranteed by human rights laws and standards. The security forces should always give journalists the space to do their work. Instead of brutalising them, they must facilitate access to information to the public. They must also provide special protection to women journalists and comply with the press law and international standards on the safety of journalists.

Indeed, by violently assaulting a journalist in the exercise of her work, security forces violated the Constitution of Senegal, which guarantees press freedom, and the Law on the press code which clearly states that journalists and media professionals have the right to free access to all sources of information.

The authorities should demonstrate that they comply with the national laws and their international obligations to protect journalists. They must now investigate the incident and bring to justice the security forces suspected to be involved in this unacceptable assault.

The Declaration of Principles on Freedom of Expression and Access to Information in Africa affirms that “States shall guarantee the safety of journalists and other media practitioners”.

The United Nations plan of action the safety of journalists and the issue of impunity invites states to take an active role in the prevention of attacks against journalists and to pay special attention to the principle of a gender-sensitive approach in the protection of journalists. It requires states to effectively and swiftly investigate and prosecute crimes against freedom of expression with no statute of limitations on persons guilty of such crimes.

“We can’t continue to count victims of attacks on the media, with total impunity. Journalism is not a crime. The authorities must put an end to this sad phenomenon.  Promoting the safety of journalists and fighting impunity must not be constrained to after-the-fact action. It requires prevention mechanisms and actions to address the root causes.”

“In this light, we urge the Government to investigate all allegations of attacks against media professionals and prosecute those suspected to be responsible for the assault against Adja Ndiaye and the ones previously denounced. Moreover, the authorities must take all necessary measures to ensure the protection and safety of journalists is effective in the country. “