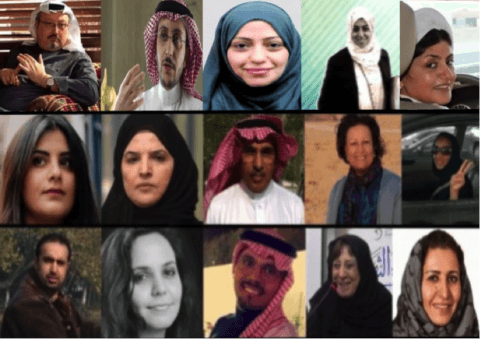 Recognising the fundamental right to express our views, free from repression, we the undersigned civil society organisations call on the international community, including the United Nations, multilateral and regional institutions as well as democratic governments committed to the freedom of expression, to take immediate steps to hold Saudi Arabia accountable for grave human rights violations. The murder of Saudi journalist Jamal Ahmad Khashoggi in the Saudi Consulate in Istanbul on 2 October is only one of many gross and systematic violations committed by the Saudi authorities inside and outside the country. As the International Day to End Impunity for Crimes against Journalists approaches on 2 November, we strongly echo calls for an independent investigation into Khashoggi’s murder, in order to hold those responsible to account.

This case, coupled with the rampant arrests of human rights defenders, including journalists, scholars and women’s rights activists; internal repression; the potential imposition of the death penalty on demonstrators; and the findings of the UN Group of Eminent Experts report which concluded that the Coalition, led by Saudi Arabia, have committed acts that may amount to international crimes in Yemen, all demonstrate Saudi Arabia’s record of gross and systematic human rights violations. Therefore, our organisations further urge the UN General Assembly to suspend Saudi Arabia from the UN Human Rights Council (HRC), in accordance with operative paragraph 8 of the General Assembly resolution 60/251.

Saudi Arabia has never had a reputation for tolerance and respect for human rights, but there were hopes that as Crown Prince Mohammed Bin Salman rolled out his economic plan (Vision 2030), and finally allowed women to drive, there would be a loosening of restrictions on women’s rights, and freedom of expression and assembly. However, prior to the driving ban being lifted in June, women human rights defenders received phone calls warning them to remain silent. The Saudi authorities then arrested dozens of women’s rights defenders (both female and male) who had been campaigning against the driving ban. The Saudi authorities’ crackdown against all forms of dissent has continued to this day.

Khashoggi criticised the arrests of human rights defenders and the reform plans of the Crown Prince, and was living in self-imposed exile in the US. On 2 October 2018, Khashoggi went to the Consulate in Istanbul with his fiancée to complete some paperwork, but never came out. Turkish officials soon claimed there was evidence that he was murdered in the Consulate, but Saudi officials did not admit he had been murdered until more than two weeks later.

It was not until two days later, on 20 October, that the Saudi public prosecution’s investigation released findings confirming that Khashoggi was deceased. Their reports suggested that he died after a “fist fight” in the Consulate, and that 18 Saudi nationals have been detained. King Salman also issued royal decrees terminating the jobs of high-level officials, including Saud Al-Qahtani, an advisor to the royal court, and Ahmed Assiri, deputy head of the General Intelligence Presidency. The public prosecution continues its investigation, but the body has not been found.

Given the contradictory reports from Saudi authorities, it is essential that an independent international investigation is undertaken.

On 18 October, the Committee to Protect Journalists (CPJ), Human Rights Watch, Amnesty International, and Reporters Without Borders (RSF) called on Turkey to request that UN Secretary-General Antonio Guterres establish a UN investigation into the extrajudicial execution of Khashoggi.

On 15 October 2018, David Kaye, the UN Special Rapporteur on freedom of expression, and Dr. Agnès Callamard, the UN Special Rapporteur on summary executions, called for “an independent investigation that could produce credible findings and provide the basis for clear punitive actions, including the possible expulsion of diplomatic personnel, removal from UN bodies (such as the Human Rights Council), travel bans, economic consequences, reparations and the possibility of trials in third states.”

We note that on 27 September, Saudi Arabia joined consensus at the UN HRC as it adopted a new resolution on the safety of journalists (A/HRC/Res/39/6). We note the calls in this resolution for “impartial, thorough, independent and effective investigations into all alleged violence, threats and attacks against journalists and media workers falling within their jurisdiction, to bring perpetrators, including those who command, conspire to commit, aid and abet or cover up such crimes to justice.” It also “[u]rges the immediate and unconditional release of journalists and media workers who have been arbitrarily arrested or arbitrarily detained.”

Khashoggi had contributed to the Washington Postand Al-Watan newspaper, and was editor-in-chief of the short-lived Al-Arab News Channel in 2015. He left Saudi Arabia in 2017 as arrests of journalists, writers, human rights defenders and activists began to escalate. In his last column published in the Washington Post, he criticised the sentencing of journalist Saleh Al-Shehi to five years in prison in February 2018. Al-Shehi is one of more than 15 journalists and bloggers who have been arrested in Saudi Arabia since September 2017, bringing the total of those in prison to 29, according to RSF, while up to 100 human rights defenders and possibly thousands of activists are also in detention according to the Gulf Centre for Human Rights (GCHR) and Saudi partners including ALQST. Many of those detained in the past year had publicly criticised reform plans related to Vision 2030, noting that women would not achieve economic equality merely by driving.

Another recent target of the crackdown on dissent is prominent economist Essam Al-Zamel, an entrepreneur known for his writing about the need for economic reform. On 1 October 2018, the Specialised Criminal Court (SCC) held a secret session during which the Public Prosecution charged Al-Zamel with violating the Anti Cyber Crime Law by “mobilising his followers on social media.” Al-Zamel criticised Vision 2030 on social media, where he had one million followers. Al-Zamel was arrested on 12 September 2017 at the same time as many other rights defenders and reformists.

The current unprecedented targeting of women human rights defenders started in January 2018 with the arrest of Noha Al-Balawi due to her online activism in support of social media campaigns for women’s rights such as (#Right2Drive) or against the male guardianship system (#IAmMyOwnGuardian). Even before that, on 10 November 2017, the SCC in Riyadh sentenced Naimah Al-Matrod to six years in jail for her online activism.

The wave of arrests continued after the March session of the HRC and the UN Committee on the Elimination of Discrimination against Women (CEDAW) published its recommendations on Saudi Arabia. Loujain Al-Hathloul, was abducted in the Emirates and brought to Saudi Arabia against her will on 15 May 2018; followed by the arrest of Dr. Eman Al-Nafjan, founder and author of the Saudiwoman’s Weblog, who had previously protested the driving ban; and Aziza Al-Yousef, a prominent campaigner for women’s rights.

Four other women’s human rights defenders who were arrested in May 2018 include Dr. Aisha Al-Manae, Dr. Hessa Al-Sheikh and Dr. Madeha Al-Ajroush, who took part in the first women’s protest movement demanding the right to drive in 1990; and Walaa Al-Shubbar, a young activist well-known for her campaigning against the male guardianship system. They are all academics and professionals who supported women’s rights and provided assistance to survivors of gender-based violence. While they have since been released, all four women are believed to be still facing charges.

On 6 June 2018, journalist, editor, TV producer and woman human rights defender Nouf Abdulaziz was arrested after a raid on her home. Following her arrest, Mayya Al-Zahrani published a letter from Abdulaziz, and was then arrested herself on 9 June 2018, for publishing the letter.

On 27 June 2018, Hatoon Al-Fassi, a renowned scholar, and associate professor of women’s history at King Saud University, was arrested. She has long been advocating for the right of women to participate in municipal elections and to drive, and was one of the first women to drive the day the ban was lifted on 24 June 2018.

Nevertheless, the arrests of women human rights defenders continued with Samar Badawi and Nassima Al-Sadah on 30 July 2018. They are being held in solitary confinement in a prison that is controlled by the Presidency of State Security, an apparatus established by order of King Salman on 20 July 2017. Badawi’s brother Raif Badawi is currently serving a 10-year prison sentence for his online advocacy, and her former husband Waleed Abu Al-Khair, is serving a 15-year sentence. Abu Al-Khair, Abdullah Al-Hamid, and Mohammad Fahad Al-Qahtani (the latter two are founding members of the Saudi Civil and Political Rights Association – ACPRA) were jointly awarded the Right Livelihood Award in September 2018. Yet all of them remain behind bars.

Relatives of other human rights defenders have also been arrested. Amal Al-Harbi, the wife of prominent activist Fowzan Al-Harbi, was arrested by State Security on 30 July 2018 while on the seaside with her children in Jeddah. Her husband is another jailed member of ACPRA. Alarmingly, in October 2018, travel bans were imposed against the families of several women’s rights defenders, such as Aziza Al-Yousef, Loujain Al-Hathloul and Eman Al-Nafjan.

In another alarming development, at a trial before the SCC on 6 August 2018, the Public Prosecutor called for the death penalty for Israa Al-Ghomgamwho was arrested with her husband Mousa Al-Hashim on 6 December 2015 after they participated in peaceful protests in Al-Qatif. Al-Ghomgam was charged under Article 6 of the Cybercrime Act of 2007 in connection with social media activity, as well as other charges related to the protests. If sentenced to death, she would be the first woman facing the death penalty on charges related to her activism. The next hearing is scheduled for 28 October 2018.

The SCC, which was set up to try terrorism cases in 2008, has mostly been used to prosecute human rights defenders and critics of the government in order to keep a tight rein on civil society.

On 12 October 2018, UN experts again called for the release of all detained women human rights defenders in Saudi Arabia. They expressed particular concern about Al-Ghomgam’s trial before the SCC, saying, “Measures aimed at countering terrorism should never be used to suppress or curtail human rights work.” It is clear that the Saudi authorities have not acted on the concerns raised by the special procedures – this non-cooperation further brings their membership on the HRC into disrepute.

Many of the human rights defenders arrested this year have been held in incommunicado detention with no access to families or lawyers. Some of them have been labelled traitors and subjected to smear campaigns in the state media, escalating the possibility they will be sentenced to lengthy prison terms. Rather than guaranteeing a safe and enabling environment for human rights defenders at a time of planned economic reform, the Saudi authorities have chosen to escalate their repression against any dissenting voices.

Our organisations reiterate our calls to the international community to hold Saudi Arabia accountable and not allow impunity for human rights violations to prevail.

We call on the international community, and in particular the UN, to:

We call on the authorities in Saudi Arabia to: