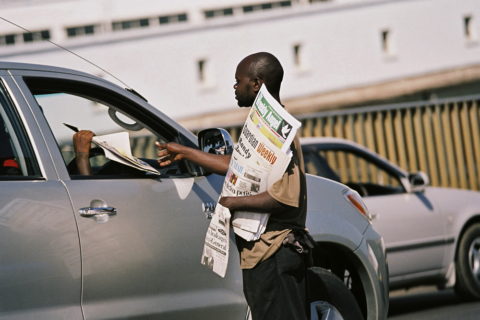 A street trader sells newspapers to the driver of a 4x4.

ARTICLE 19 has commenced preparations for Rwanda’s Universal Periodic Review (UPR) by training 20 Senior Editors and Civil Society leaders on their roles and responsibilities in the review process. Rwanda will be reviewed during the 23rd session of the Human Rights Council in 2015.

The UPR is a unique state-driven process at the United Nations which provides the opportunity for each state to explain how it has improved its human rights situation, and for other states to make recommendations for improvement, which the reviewed state should either accept or reject.

“In January 2010, the Rwanda Government accepted 67 of the 73 recommendations submitted by UN member States. In September 2015 it will explain how far it has gone in implementing these recommendations and we think the training will help civil society and media to give a fair account of the process so far,” said Henry Maina Director, ARTICLE 19 Eastern Africa.

The training, which took place on 3 and 4 June in Kigali, was opened by Chris Mburu, a Senior Human Rights Advisor at the United Nations office in Rwanda. He emphasized the independence and fairness of the UPR process, saying: “This is now the most important review in the human rights calendar. It is unique and will help Rwanda to improve on its human rights record.”

Ministry of Justice State Attorney Eugene Rusanganwa presented the UPR progress report observing that the country had achieved great milestones in the promotion of human rights. He noted the revision of the media law and the genocide ideology law as examples of the recommendations already implemented.  “The UPR will provide an opportunity for Rwanda to internationally showcase its achievements and we need the support of the media and civil society organisations to show how far we have come in the process,” added Rusanganwa.

Claude Niwe-Ruku­ndo from the Rwanda National Human Rights Commission underlined the unique position that the Human rights institution occupies in the UPR process.

ARTICLE 19 has participated in UPRs in all countries in the Eastern Africa region and engaged with Governments including in Kenya, Rwanda, Uganda, and Tanzania to ensure accepted recommendations are implemented.