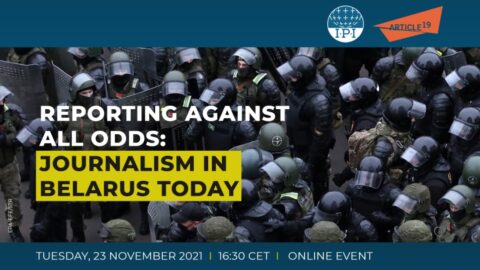 Since the fradulent August 2020 presidential elections, the Belarusian regime continues to relentlessly tighten its grip on the few remaining independent media in the country and viciously harass journalists. Since the beginning of the protests at least 497 journalists have been detained. As of 9 November 2021, 29 journalists – among over 800 political prisoners – remain imprisoned based on dubious charges. Their crime? Covering protests, exposing state violence against democracy protesters and reporting on inhumane conditions in prison.

The Belarusian authorities openly conduct politically-motivated persecution of journalists with impunity. Journalists are not only impeded from reporting but they also remain at grave risk if they continue their work. In addition to legal harassment, the regime has carried out widespread censorship, including by blocking the websites of news outlets. Civil society organisations dedicated to defending freedom of expression have been forcibly closed. Many Telegram channels that spread independent information are labelled “extremist”. The regime did not hesitate to hijack a plane in order to arrest Raman Pratasevich, the editor-in-chief of Telegram channel NEXTA, and his girlfriend, Sofia Sapega.

REGISTER HERE TO JOIN US ONLINE

The increased repression against the media and civil society in recent months is also a reflection of the lack of a sufficiently robust response from the international community. The panel discussion held on 23 November 2021 – which runs parallel to a high-level political dialogue taking place in Vienna – will feature highly regarded experts and journalists who will seek to answer the following questions:

How do journalists carry on reporting in such extreme conditions?

How can we best support media inside Belarus and in exile?

What is the role of the international community in ending impunity in Belarus?

What is the future of journalism in Belarus?

Teresa Ribeiro, OSCE Representative on Freedom of the Media

Miklos Haraszti, UN Special Rapporteur on the situation of human rights in Belarus 2012-2018

Reporting against all odds: Journalism in Belarus today