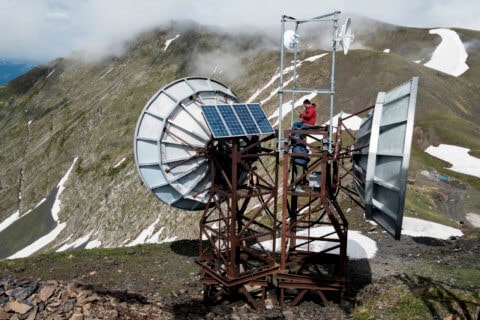 Adding their infrastructure to an existing telecommunications tower, Amirani Giorganashvili, Giorgi Kitidze, Giorgi Kirvalidze, Konstantin Stalinsky and Murmani Tcharelidze install a free Wi-Fi hotspot in the Abano Pass, which at at 2826m is said to be the highest driveable road in the Caucasus Mountains.

The Internet has become a powerful vehicle for exercising human rights. But it is also increasingly becoming a tool for restricting rights. In 2017 internet shutdowns blocked user access to information in 30 countries and more than half of the world’s internet users’ communications were surveilled or censored. The Internet’s infrastructure — the cables, satellites, and spectrum that transmit information between computers — can provide a bottleneck for governments and private actors alike to control information flows. This manipulation of Internet infrastructure can be used to limit a range of freedoms from surveilling conversations online and imposing censorships, to blocking users in a particular country from information about political issues. The majority of these chokepoints are controlled by private companies, often making them the mediators between respecting human rights with economic incentives and pressures to appease government requests for user data.

While the spotlight is increasingly falling on social media platforms for their role in undermining internet freedoms, private Internet infrastructure providers have gone relatively unscrutinised. Research shows that as providers gain users, they become more enticing targets for governments to co-opt in order to increase their control over citizens’ Internet access; a trend on the rise in dictatorships and democracies alike. Though state actors often initiate these attacks on users’ rights to access information, privacy and freedom of expression, private Internet providers should not be complicit facilitators.

Some Internet infrastructure providers have acknowledged their influence and have established safeguards against abuse of privacy, free expression and open access to information. But unfortunately, most companies fail to meet basic human rights responsibilities for digital access providers.  This report examines the most influential catalysts and barriers that shape Internet infrastructure providers’ behaviour regarding human rights, focusing on providers’ adoption of the UN Guiding Principles on Business and Human Rights (UNGPs) — a widely accepted global standard defining responsibilities of  businesses. Adoption of the UNGPs provides a valuable metric for understanding how companies are fulfilling their positive responsibilities to mitigate human rights impacts of their operations, publish transparency reports, and provide remedy for potential human rights violations.

The report finds key drivers for Internet infrastructure companies which have developed strong human right protections to be:

Competition between companies was identified as both a potential driver and barrier, inciting companies to meet higher standards set by peers, or inducing them to settle to the “lowest common denominator” of human rights protections among their competitors.

Recommendations address how businesses and civil society can partner to mitigate risks and embed accountability mechanisms for human rights impacts.