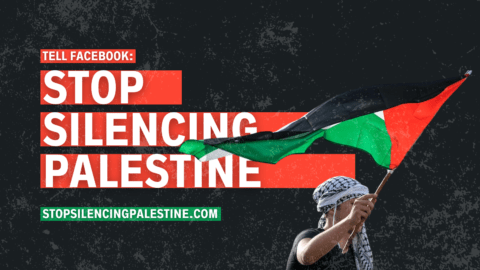 Today ARTICLE19 joins 16 organisations and more than 50 artists, journalists, and human rights defenders in calling on Facebook and Instagram to #StopSilencingPalestine. When human rights are stifled offline, their protection online is even more important.

“Social media is incredibly important to activists exposing human rights violations and building protest movements, and this is true in Palestine as it is elsewhere. So when companies like Facebook apply secret rules which unfairly impact those speaking out against abuses, it’s a serious problem for freedom of expression and other human rights.” said Saloua Ghazouani, Director of ARTICLE 19 MENA.

“Facebook needs to take action to address its failures and end the silencing of Palestinian activists online. We want to see much more transparency from the company on how and why its content decisions are being taken, and more cooperation with civil society on making sure rights are protected online.” she added.

As Palestinians and their supporters have taken to Facebook, Twitter, and Instagram to share images and posts about the violence they face at the hands of Israeli security forces with the world, some have noticed their content suddenly disappear, or had their posts flagged for breaches of the platforms’ terms of use. In some cases, their accounts have been suspended, and in others features such as liking and commenting have been restricted.

On 13 May, The Intercept published Facebook’s internal policy on when to delete Facebook or Instagram posts containing the word “Zionist”. Their source said the policy has been in place since 2019, contrary to what the company claimed in meetings with civil society.

7amleh, the Arab Center for Social Media Advancement, just released a report called “The Attacks on Palestinian Digital Rights”, which documented more than 500 reports between 6 May and 19 May on such takedowns, marking an increase in attacks on Palestinian digital rights.

This is not just a “glitch” as the companies have been telling us. These are systemic problems that require immediate action.

Join the campaign at stopsilencingpalestine.com to demand Facebook takes action, through: