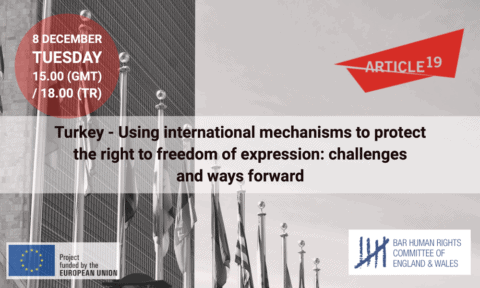 Video of the Event

The last decade has seen a dramatic collapse of freedom of expression and the rule of law in Turkey. The shift from a parliamentary to a presidential system in 2017 during the state of emergency (2016-2018) resulted in the erosion of checks and balances and the separation of powers. Despite its record as one of the worst environments for freedom of expression in the world, the Turkish government is still concerned about its reputation in international fora, including the Council of Europe and United Nations, providing opportunities for civil society and the legal community to ensure sustained pressure on Turkey to address rights violations and bring its practice into line with its international human rights commitments.

In response to the unprecedented threat against freedom of expression and fair trial rights, ARTICLE 19 and BHRC have collaborated on monitoring trials involving freedom of expression in Turkey since 2016. The subsequent trial observation reports document a pattern of systematic violations of fair trial rights and freedom of expression, including the emblematic cases of the novelist Ahmet Altan, politician Selahattin Demirtaş and philanthropist Osman Kavala. In 2019  the European Court of Human Rights (ECtHR) found that the real purpose of their detention was to silence them in breach of the European Convention on Human Rights and held that Demirtaş and Kavala should be immediately released. However, for over a year Turkey has ignored these rulings and neither have been released from prison.

Despite the crucial role of the Council of Europe in ensuring pressure on Turkey to comply with its human rights obligations, the Court has been frequently criticised for the lack of clarity on how the policy on prioritisation of cases is applied. The Turkish government is also now finding new ways to “avoid” implementing ECtHR’s judgments.

This event brings together experts to discuss the importance of documenting fair trial violations in freedom of expression cases and to answer a number of key questions: Why does Turkey have so many repeat violations at the ECtHR and how can this trend be reversed? Is the ECtHR equipped to deal with the scale of human rights violations in Turkey? What is the significance of the recent judgments of the Court, of lack thereof, in the Ahmet Altan, Selahattin Demirtaş and Osman Kavala cases? What is the role of the subsidiarity principle and the margin of appreciation in the Court’s determination of Turkish cases? What other international mechanisms, including the UN, can be used to improve freedom of expression in Turkey? What is the impact of the UN mechanisms for the protection of human rights in Turkey?

Join us next Tuesday, 8th December to explore these questions and more.

Turkish-English simultaneous interpretation will be provided. Participation will be available during the Q&A session.

Registration is required to attend in this online panel. Participants will receive login information upon approved registration.

The event will be hosted by ARTICLE 19, and co-sponsored by the Bar Human Rights Committee for England and Wales.