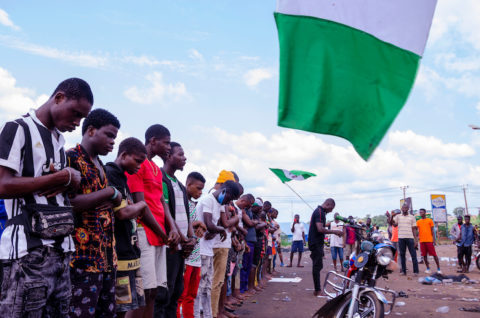 Protest in Nigeria must be protected. Photo credit: Vic Josh/Shutterstock

ARTICLE 19 strongly condemns the security forces’ crackdown on the assembly of the Islamic Movement (IMN) in Nigeria that reportedly led to the death of eight people and the arrest of at least 57 others on 28 September in Abuja.

On Tuesday 28 September, members of the banned Shia IMN group were peacefully gathering to commemorate Arbaeen, a 40-day religious event widely observed in Muslim countries to mourn the death of Imam Hussein, the grandson of the Prophet Mohammad.

Media and human rights organisations reported that eight people were killed and at least 57 people were arrested in Abuja. The spokesperson of the group claimed security forces shot dead eight Shia Muslims. Nigerian police denied the allegations of killings, but admitted to having arrested 57 people, claiming that they recovered petrol bombs and bags of stones. The IMN group was banned in 2019 by a court qualifying the group’s activities as “acts of terrorism and illegality”.

Findings from our interviews with local witnesses confirmed no violence from the demonstrators.  ARTICLE 19 seeks to remind the Nigerian authorities that an unauthorised protest is not necessarily illegal and that the evidence so far available clearly shows that the police did not need to use such extreme force against this gathering.

“The rights to freedom of peaceful assembly and belief are enshrined in Nigeria’s constitution. The Nigerian authorities must end the pattern of repression of peaceful assemblies through the excessive use of force against demonstrators. They must ensure their security forces refrain from using unnecessary and excessive firearms to repress civilian assemblies. The authorities must further ensure prompt, thorough and independent investigations into the cases of excessive use of force and that perpetrators are brought to justice,” said Bulakali Alfred Nkuru, Deputy Regional Director of ARTICE 19 West Africa.

Ensuring that the fundamental rights to freedom of association and peaceful assembly are respected and protected for all Nigerians without distinction of any kind and in accordance with its Constitution are among the recommendations Nigeria accepted during its last Universal Periodic Review. Nigeria should, therefore, make it a priority for all State security agencies.

Nigerian authorities must respect the rights to freedoms of peaceful assembly and belief enshrined in Sections 38 and 40 of the Constitution of Nigeria, as well as Articles 21 and 18 of the International Covenant on Civil and Political Rights (ICCPR) ,to which Nigeria is a party.

The  United Nations Basic Principles on the Use of Force and Firearms by Law Enforcement Officials states: “In the dispersal of assemblies that are unlawful but non-violent, law enforcement officials shall avoid the use of force or, where that is not practicable, shall restrict such force to the minimum extent necessary.”

The principle of non-discrimination of the United Nations Human Rights Guidance on Less-Lethal Weapons in Law clearly stipulates that: “In performing their duties law enforcement officials shall not discriminate against any person on the basis of race, ethnicity, colour, sex, sexual orientation, language, religion, political or other opinion, national or social origin, disability, property or birth, or other similar criteria.”

ARTICLE 19 calls on the Nigerian authorities to conduct independent investigations to bring all perpetrators to justice. In addition, the police should ensure that everyone can exercise their right to peaceful assembly and protect those assembling from attack. Furthermore, all persons arrested simply for their beliefs should be released by the authorities.