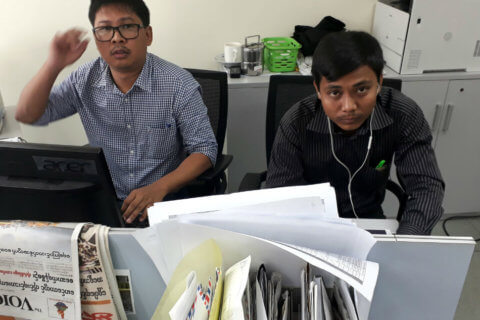 The decision by a Yangon court to formally charge Wa Lone and Kyaw Soe Oo, Reuters journalists who helped expose a massacre of Rohingya civilians by Myanmar Army soldiers, perpetuates a grave injustice and casts doubt on the independence of Myanmar’s judiciary, said ARTICLE 19. The government must act decisively to protect journalists, promote accountability for human rights violations, and end the politicisation of Myanmar’s criminal justice system.

“Today’s decision renders the judiciary complicit in a farcical miscarriage of justice,” said Matthew Bugher, Head of Asia Programme for ARTICLE 19. “Wa Lone and Kyaw Soe Oo took great personal risks to cast light on events largely hidden from the public’s view. Instead of dragging them through preposterous legal proceedings, the government should commend the journalists for their indispensable role in promoting accountability.”

Wa Lone and Kyaw Soe Oo have been in pre-trial detention since their arrest on 12 December 2017. The two journalists were arrested while investigating the execution of ten Rohingya men and boys by Myanmar Army soldiers in Inn Din village in northern Rakhine State. Reuters subsequently published an in-depth report on the massacre, which drew from the research conducted by Wa Lone and Kyaw Soe Oo. In April, the military announced that seven soldiers had been sentenced to ten years’ imprisonment for their role in the killings.

After months of pre-trial hearings, the court in Yangon today charged Wa Lone and Kyaw Soe Oo under section 3 of the Official Secrets Acts, a vaguely-worded colonial era law that carries a penalty of up to 14 years’ imprisonment for possession or dissemination of materials that are “calculated to be or might be or [are] intended to be, directly or indirectly, useful to an enemy”.

The court decided to charge Wa Lone and Kyaw Soe Oo despite being presented with evidence indicating that they had been caught in a poorly concealed entrapment plot. The two journalists were arrested shortly after police officers handed them a set of official documents in a restaurant in Yangon. During pre-trial hearings, a police officer provided a detailed description of orders given by a police chief to set up the sting operation. The testifying officer was subsequently jailed for one year for violating police disciplinary rules. One police witness consulted notes written on his hand while giving testimony in court, another admitted burning notes relating to the arrest of the two men, and a third stated that he was not aware of proper procedures for recording arrests.

The ongoing criminal proceedings against Wa Lone and Kyaw Soe Oo underscore the Myanmar government’s wide-ranging efforts to obstruct reporting on the Rakhine State crisis and to whitewash human rights violations by authorities. The government has denied reporters, diplomats and human rights monitors access to Rakhine State except as part of highly choreographed visits chaperoned by government officials. Moreover, the government has persisted in denying access to the country by the UN Special Rapporteur on the situation of human rights in Myanmar and a UN Fact-Finding Mission tasked with investigating human rights violations by the Myanmar military.

More broadly, journalists face grave risks and considerable challenges while practicing their profession in Myanmar. In addition to the Official Secrets Act, authorities use a raft of repressive laws and an antiquated penal code to restrict press freedom and prosecute those reporting on government misconduct and other sensitive topics.

“Wa Lone and Kyaw Soe Oo deserve praise not persecution, and yet they face longer sentences than the soldiers who committed the crimes they were reporting,” said Matthew Bugher. “The government has made investigative journalism one of the most dangerous professions in the country. The persistent assault on press freedom is one of the defining features of this government’s dreadful human rights record.”