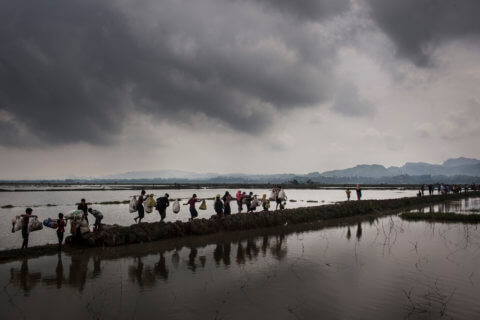 ARTICLE 19 condemns the 10 January 2018 decision by a district court in Yangon to officially charge two Reuters journalists, Wa Lone and Kyaw Soe Oo, under the Official Secrets Act. The two face up to 14 years imprisonment for allegedly possessing military files regarding the conflict in Rakhine State, where state security forces have committed grave human rights abuses, including crimes against humanity. ARTICLE 19 urges Myanmar authorities to drop the charges against the two journalists and end the ongoing judicial harassment of independent media in the country.

Wa Lone and Kyaw Soe Oo were arrested on 12 December 2017 and subsequently detained in secret for two weeks, without access to legal counsel or family members. The two journalists had previously reported on the situation in Rakhine State, where state security forces, at times aided by local residents, have attacked members of the Rohingya ethnic minority. Soldiers have attacked Rohingya civilians, burned villages, and committed mass rape as part of a brutal military crackdown in the wake of attacks by Rohingya militants in 2016 and 2017. In the past five months, approximately 650,000 Rohingya have fled the country to neighbouring Bangladesh.

Section 3 of the Official Secrets Act provides for a sentence of up to 14 years for any person who, “for any purpose prejudicial to the safety or interests of the State— (c) obtains, collects, records or publishes or communicates to any other person any secret official code or password, or any sketch, plan, model, article or note or other document or information which is calculated to be or might be or is intended to be, directly or indirectly, useful to an enemy”.

On 17 December, President Htin Kyaw’s office said it had authorised the case against the two journalists as required by Section 13 of the Act. Only days later, the government announced its decision to deny access to the country to Yanghee Lee, the UN Special Rapporteur on the situation of human rights in Myanmar. During previous visits to the country, the Special Rapporteur had raised concerns regarding press freedom in Myanmar.

“The prosecution of Wa Lone and Kyaw Soe Oo signasl a further deterioration of press freedom under the NLD government. By sanctioning these charges, the NLD government has demonstrated an alarming disregard for the freedom of expression and fostered a chilling environment for independent media throughout the country,” said Matthew Bugher, Head of Asia Programme at ARTICLE 19.

The Official Secrets Acts is one of a number of colonial-era laws that violate international standards and have no place in modern Myanmar. In recent years, such laws have frequently been used to stifle dissent and to prosecute journalists and human rights defenders. Since the Aung San Suu Kyi-led NLD government came to power in 2016, an alarming number of journalists have been arrested and imprisoned for peacefully reporting on matters of public interest, including issues related to internal conflicts and the country’s abusive and powerful military.[1]

“There is no democracy without a free press and accountability for human rights abuses. The Myanmar government must halt the judicial harassment of journalists and end the criminalisation of free expression,” added Bugher.

ARTICLE 19 calls on the government to immediately drop all charges and release Wa Lone, Kyaw Soe Oo and other journalists detained merely for their reporting. Myanmar authorities should also engage with UN human rights mechanisms in order to promote freedom of expression and ensure accountability for human rights violations.

[1] In June 2017, two journalists from the Irrawaddy newspaper were arrested under the colonial era Unlawful Associations Act for reporting on the burning of drugs in an area controlled by an ethnic armed group. More recently, the government has used the 1934 Aircraft Act to jail Singaporean journalist Lau Hon Meng and Malaysian journalist Mok Choy Lin, who work for Turkish state media, for two months.