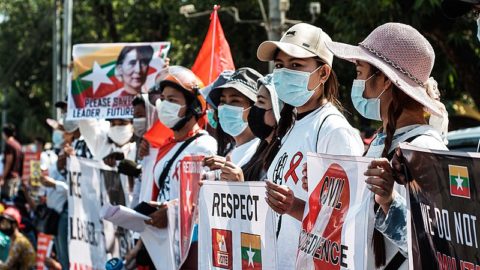 ARTICLE 19 made this statement during the oral update of the UN Special Rapporteur on Myanmar at the 47th Session of the Human Rights Council.

We thank the Special Rapporteur for his oral update. We concur that States can and must do more to address the junta’s systemic human rights violations against the people of Myanmar.

We are deeply concerned about the continued arrest of journalists, lawyers and human rights defenders. We are shocked by reports of torture in detention and continuing killings of anti-coup protesters and others, including more than 69 children. The authorities have escalated the arrest and enforced disappearance of civil servants and professionals who join the Civil Disobedience Movement. We call on the military to immediately and unconditionally release all those detained for the exercise of their right to freedom of expression.

Since the coup in February, the Myanmar military has drastically tightened its controls over the Internet, blocking access to Facebook, Twitter, and virtual private networks. The military continues to enact more repressive restrictions on Internet access while simultaneously increasing its digital surveillance capabilities. In June, the military cut off the Internet nationwide for an hour to disrupt a press conference being held by the National Unity Government.

The dramatic increase in arrests and extrajudicial killings have caused many to flee Myanmar for neighbouring states. We call on Member States to protect all Myanmar nationals currently within their borders, including by respecting the principle of non-refoulement. We further call on Member States to undertake all efforts to protect those fleeing internally or externally.

We are concerned by increasingly strict controls on the operations of civil society organisations and urge all Member States to adapt flexible policies to support civil society groups operating in the country and in exile.

What measures can Members States take to support civil society in view of the increasingly difficult operational environment?