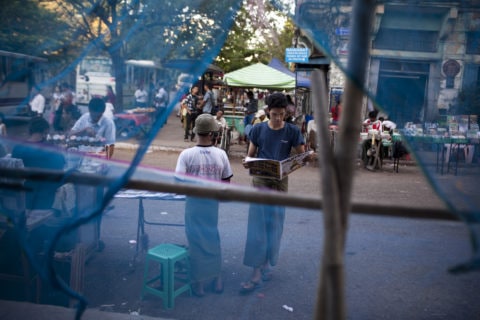 A man reads a newspaper on a street in Yangon. As part of the reforms, the government has started to open up the domestic media.

Today, Myanmar’s government was criticised inside the United Nations Human Rights Council for its handling of the investigation into the killing of the journalist Aung Kyaw Naing, known by his pen name ‘Par Gyi’.

“The investigation into the killing of Par Gyi has been disappointing. The 4 October marks the one-year anniversary of his killing and we are no closer to learning what happened to him while under custody. No defendants have been brought forward,” said Thomas Hughes, ARTICLE 19’s Executive Director.

“The government has said that Par Gyi was shot after grabbing a gun from his captors. A judge also pronounced that he was shot. However, the government has not prosecuted the shooters nor explained why his custodians buried his body in a field, or how his body came to be covered in signs of abuse,” added Hughes.

Par Gyi was a freelance journalist who had contributed content to several of the country’s largest media houses, including Eleven Media, Yangon Times and The Voice.

According to a Myanmar army statement, Par Gyi was taken into custody on 30 September 2014 and killed on 4 October. The army said that Par Gyi was a “communications captain” for an ethnic group currently in conflict with the government.

Today’s discussion inside the United Nations Human Rights Council was in response to a UN report on the safety of journalists which flagged up the issue of impunity when journalists face violence in countries worldwide. Par Gyi’s case was highlighted among others as examples where impunity exists and is not being challenged, despite the obligations of the state to do so.

ARTICLE 19 urges the government to explain to Par Gyi’s family and their lawyers what is happening, and then prosecute and let justice be served.”