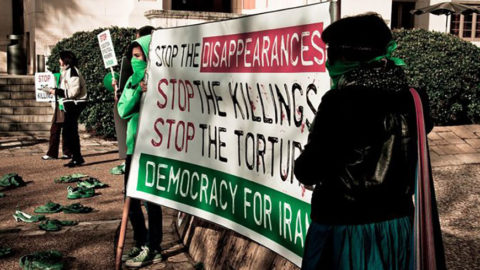 Today, on the occasion of the International Day of the Victims of Enforced Disappearances, we the 33 undersigned local, regional, and international organizations, associations, and networks come together to highlight the dramatic and persistent nature of enforced disappearances in the Middle East and North Africa (MENA) region and the accompanying impunity enjoyed by perpetrators of these crimes throughout the region.

Impunity for perpetrators of enforced disappearances remains the norm. Authorities of MENA countries regularly fail to cooperate or respond to domestic inquiries regarding disappeared persons; at times, they obstruct efforts to uncover their fate. Moreover, the vast majority of MENA States are not parties to the International Convention for the Protection of All Persons from Enforced Disappearances (ICPPED). Out of the 22 countries that form the Arab League, only six are bound by it: Iraq, Mauritania, Morocco, Oman, Sudan, and Tunisia.

According to the International Committee of the Red Cross (ICRC), Iraq has one of the highest numbers of missing persons in the world, and the International Commission on Missing Persons (ICMP) estimates that number to be between 250,000 and one million Iraqis since 2003. While the country has a history of enforced disappearances, the crime continues to be committed today, with a spike in cases in recent years, including following the country’s 2019 peaceful protests. Actors across the board, from security officials affiliated with the Iraqi state to non-state actors such as Al-Qaeda, ISIS, and other armed groups, have been accused of being responsible for practices tantamount to enforced disappearances in recent years. The UN Committee on Enforced Disappearances has received allegations about 420 places of secret detention, which often serve as sites for enforced disappearances. Though Iraqi authorities have indicated their willingness to investigate cases of disappearance, effective, state-led investigations have not been carried out.

In Syria, at least 101,678 persons have been forcibly disappeared between March 2011 and March 2021, 85 percent of whom have been disappeared by the regime and 15 percent of whom have been disappeared by other parties to the conflict, including the Syrian Democratic Forces, the Syrian National Army, ISIS, and Hay’at Tahrir al-Sham. Between the beginning of 2018 and August 2020, the Syrian Network for Human Rights (SNHR) documented 991 cases of forcibly disappeared persons whose fate has been revealed by the Syrian regime: all had died in detention in circumstances that have yet to be determined. Enforced disappearances continue to take place; in May 2021, five leading associations of victims, survivors, and families called for the creation of a humanitarian mechanism to address the plight of secret detentions and enforced disappearances.

It has become increasingly common in Egypt for detainees to be forcibly disappeared for days upon their arrest. When family members and lawyers inquire into the location of their missing loved ones and clients, authorities often deny having them in custody or fail to respond to inquiries about their whereabouts. Egypt’s failure to proscribe the crime of enforced disappearance in domestic legislation further encourages this. Enforced disappearances only come to an end when the detainees are brought before the Supreme State Security Prosecution; authorities regularly falsify arrest dates on warrants to cover up the disappearance. Though there are no precise numbers due to the nature of the crime, in September 2020, the Egyptian Commission for Rights and Freedoms (ECRF) reported that at least 2,723 people had been forcibly disappeared by Egyptian security forces since the organization began tracking cases in 2015.

In Libya, militias and the state alike are forcibly disappearing individuals, including for their human rights work, their real or perceived political opinions, and their identity or skin color, as reported by Lawyers for Justice in Libya (LFJL). At times, those disappeared are subject to extrajudicial or summary executions. Enforced disappearances across the country are widely underreported due to security risks faced by those denouncing these acts, including intimidation and retaliation by the state and militias.

In Saudi Arabia, state security forces have carried out enforced disappearances of journalists, human rights defenders, and individuals exercising their right to freedom of expression. In 2020, the United Nations Working Group on Enforced or Involuntary Disappearances sent Saudi authorities a general allegation letter after receiving information about the “obstacles to the implementation of the 1992 Declaration on the Protection of All Persons from Enforced Disappearances” that have been described as “pervasive and deliberate” and  “embedded in the legal, institutional and policy framework of Saudi Arabia.” Enforced disappearances are not criminal offences under the country’s penal legislation.

Historical instances of enforced disappearances remain to be investigated. Two decades after the end of the internal conflict in Algeria (which took place between 1992 and 2002), the state continues to deny the existence of a deliberate policy of enforced disappearances. The 2006 Charter for Peace and National Reconciliation rejects “all allegations that attribute to the state the responsibility for a deliberate phenomenon of disappearances”, and places severe restrictions, including punishments, on the ability of family members to pursue legal action for this crime, de facto serving as an immunity law. NGOs estimate that between 10,000 and 20,000 persons were disappeared by the Algerian state during the internal conflict. In Lebanon, legislators passed a 2018 law on missing and forcibly disappeared persons that creates a commission to investigate disappearances, including the thousands disappeared during the Lebanese civil war between 1975 and 1990 by Lebanese and non-Lebanese factions. Though a positive development, additional steps must be taken to uncover the fate of those whose families continue to await justice.

On the International Day of the Victims of Enforced Disappearances, we, the undersigned, call on States and multilateral and international institutions to take action to end impunity and ensure accountability for the crime of enforced disappearance, and to bring redress to victims, survivors, and family members affected by the crime.

More specifically, we call on MENA states to conduct thorough, timely, and transparent investigations into reports of enforced disappearances; and to take the necessary measures to search for and locate disappeared persons or their remains. We call on these states to respond to allegation letters regarding individual cases and general complaints concerning enforced disappearances sent by the United Nations Working Group on Enforced or Involuntary Disappearances and to invite the Working Group to conduct country visits, providing them with full access to carry out their mission. Finally, we call on all MENA states to promptly become parties to and fully implement the ICPPED in their national laws; and to pass domestic legislation that recognizes and criminalizes enforced disappearance, and brings domestic law in line with the Convention and other relevant international human rights law obligations.

We call on all nation states to ensure that enforced disappearances are being adequately prosecuted and adjudicated; to directly engage with survivors and family members of disappeared persons in crafting policy; and to provide assistance to the work of civil society on reparations, rehabilitation, support for families, and accountability. Additionally, we call on states with legislation that recognizes extraterritorial jurisdiction and allows for the prosecution of human rights abuses committed abroad to take the lead on investigating and prosecuting cases involving enforced disappearances before their national court systems. We call on states, including the U.S., Canada, the UK, and on countries of the European Union to consider and implement targeted human rights sanctions against perpetrators of enforced disappearances.

We call on multilateral and international institutions to focus on the issue of enforced disappearances in their activities and allocate sufficient resources to ensure effective documentation, reporting, and accountability, while publicly holding member states to account.

Association for Freedom of Thought and Expression

Center for Justice and Accountability

Committee of the Families of the Kidnapped and Disappeared in Lebanon

Lawyers for Justice in Libya (LFJL)

The Coalition of Families of Persons Kidnapped by ISIS – Da’esh