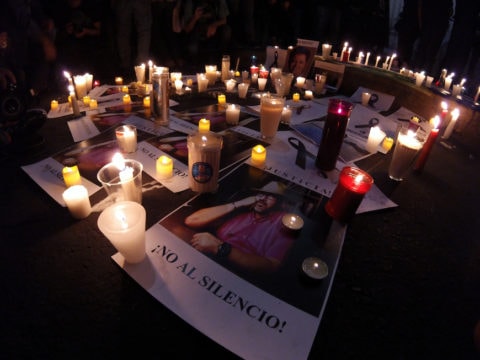 Demonstration against the murder of journalist Javier Valdez. His widow Griselda Triana is one of the many journalists who have been targeted

Mexico City, 18 July, 2021. As reported in various global media outlets, the Pegasus Project investigation has revealed fresh information about the use of Pegasus spyware against journalists, human rights defenders and other members of civil society around the world, including in Mexico.

The Pegasus Project was coordinated by Forbidden Stories, a French investigative journalism organisation, in conjunction with human rights organisation Amnesty International. More than 80 journalists from around the world from 17 media outlets and organisations took part in the investigation.

Reports published by Aristegui Noticias, Proceso, the Washington Post and the Guardian reveal that more than 50,000 phone numbers were potential targets of Pegasus; more than 15,000 of these numbers include the Mexico country code.

The 15,000 Mexican numbers reported include those of human rights defenders, relatives of the 43 students from Ayotzinapa Rural School who were disappeared and then murdered in 2014, researchers from the Inter-American Commission on Human Rights working on the Ayotzinapa investigation and more than 25 journalists, including Cecilio Pineda Brito from Guerrero, who was killed in March 2017, just a few weeks after being targeted by Pegasus, according to published information.

“When it comes to the recent revelations, Mexico tops the list, exposing that 15,000 people were targeted for surveillance,” said  Leopoldo Maldonado, Director of ARTICLE 19, Mexico and Central America. “This reveals the systematic, widespread and abusive surveillance used by the government of Enrique Peña Nieto against people who held it up to scrutiny or tried to hold it to account.”

The numbers also include those of the family members and close aides of the current President, Andres Manuel Lopez Obrador.  They were targeted while he was a leading opposition figure.

The new revelations reconfirm the findings published in 2017 following joint investigations carried out by Citizen Lab, ARTICLE 19, R3D and SocialTIC. Those investigations reveal that, in addition to Cecilio Pineda Brito, journalists targeted include Ismael Bojórquez, Andrés Villarreal, Carmen Aristegui, her family members and her work team, as well as journalist Griselda Triana, the widow of the journalist Javier Valdéz.

These revelations confirm evidence that Mexican state agencies including the Center for Investigation and National Security (Cisen), the Attorney General’s Office (PGR) and the Secretariat of National Defence (SEDENA), carried out systematic surveillance against journalists, human rights defenders, activists and political opponents — illegal surveillance that should not go unpunished.

As long as these abuses are not fully examined, they will continue to represent a serious obstacle to free journalism and the defence of human rights, a risk to the privacy of anyone anywhere, and a serious threat to democratic institutions.

Despite the fact that for more than four years there has been an open investigation in the Office of the Attorney General, led by ARTICLE 19, R3D and Centro de Derechos Humanos Agustín Pro Juárez organisations representing the victims, there have been no significant advances in the case. Therefore, as the new revelations make clear, there is an urgent need to revive, restructure and strengthen the criminal investigation.

An impartial, comprehensive, exhaustive and professional investigation, identifying all the victims of the espionage, the perpetrators of the attacks, as well as the officials who participated in covering up the attacks, must be initiated. It is vital that both the victims and society overall knows the full truth regarding these serious violations.

“Mass surveillance of journalists, activists, victims of violence and political opponents is criminal,” said Quinn McKew, Executive Director for ARTICLE 19. “It is a direct affront to the validity of human rights and to democracy itself. These tools need to be regulated by an  international mechanism to cut off the ability of governments to use them for illegal purposes under international law. Until this point, there must be a moratorium on the sale and transfer of spyware tech. Governments must conduct independent and thorough investigations to clarify these facts. But above all, they must introduce rigid export and import controls based on human rights standards to ensure this illegal surveillance is not repeated.”

These new findings also reiterate the urgent need to modify the legal framework to prevent the irregular acquisition and illegal use and abuse of surveillance tools in Mexico — and the impunity for these actions, which remains intact despite international recommendations and promises made by the current government that it would not spy on journalists and civil society. It is essential to establish democratic controls and regulations to hold the government accountable to this commitment.

“It is unacceptable that in a country plagued by criminal and state violence that people who take steps to improve the situation are targeted for surveillance — and the perpetrators of the worst atrocities are free from scrutiny and continue to operate with impunity,” said Maldonado.