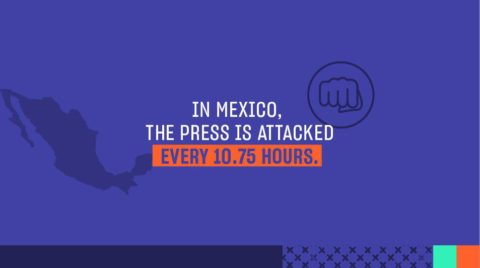 2019[1], the first year of President Andrés Manuel López Obrador’s administration, was the most violent year for the press in Mexico in a decade, with 609 documented attacks. But in 2020, the country was already well on track to surpass this record. By way of comparison, the first half of 2020 has already surpassed the total number of documented attacks in all of 2015. If this trend continues, 2020 will be the most violent year for the press that ARTICLE 19 has recorded[2].

Documented attacks against the press

Journalists in Mexico continue to be killed for their work. ARTICLE 19 documented the murder of two journalists from January to June:

In the second half of the year, two more journalists have been killed: Pablo Morrugares, on 2 August in Guerrero, and Julio Valdivia, on 9 September in Veracruz.  Pablo Morrugares, had protection under the mechanism for the protection for human rights defenders and journalists, but he and his bodyguard were shot in bar owned by Morrugares by an unknown number of assassins. Hours earlier, he had reported on Facebook live that Tlacos, an organised crime group, were responsible for a recent spate of murders.

Julio Valdivia was a reporter and correspondent for the newspaper El Mundo de Córdoba, who was allegedly killed by members of organised crime. His body was found decapitated on the train tracks in the town of Motzorongo. The reporter covered the violence in the border region between Oaxaca and Veracruz.

Under the current administration, 15 journalists have now been murdered because of their work.

The main attacks perpetrated against journalists and media workers are threats, intimidation and harassment, and blocking access to public information or unwanted editorial intervention on journalist work. Between January and June 2020, journalists in Mexico were subjected to:

The most violent states

Mexico City, Puebla, Oaxaca, Veracruz and Quintana Roo registered the most attacks against the press in the first half of 2020. These regions saw 48% of the total cases of violence.

Compared to the first six months of last year, Oaxaca reported a similar number of attacks, going from 33 to 32. Veracruz reduced its documented cases from 33 to 26, however 30 journalists have now been murdered in the state since 2000. 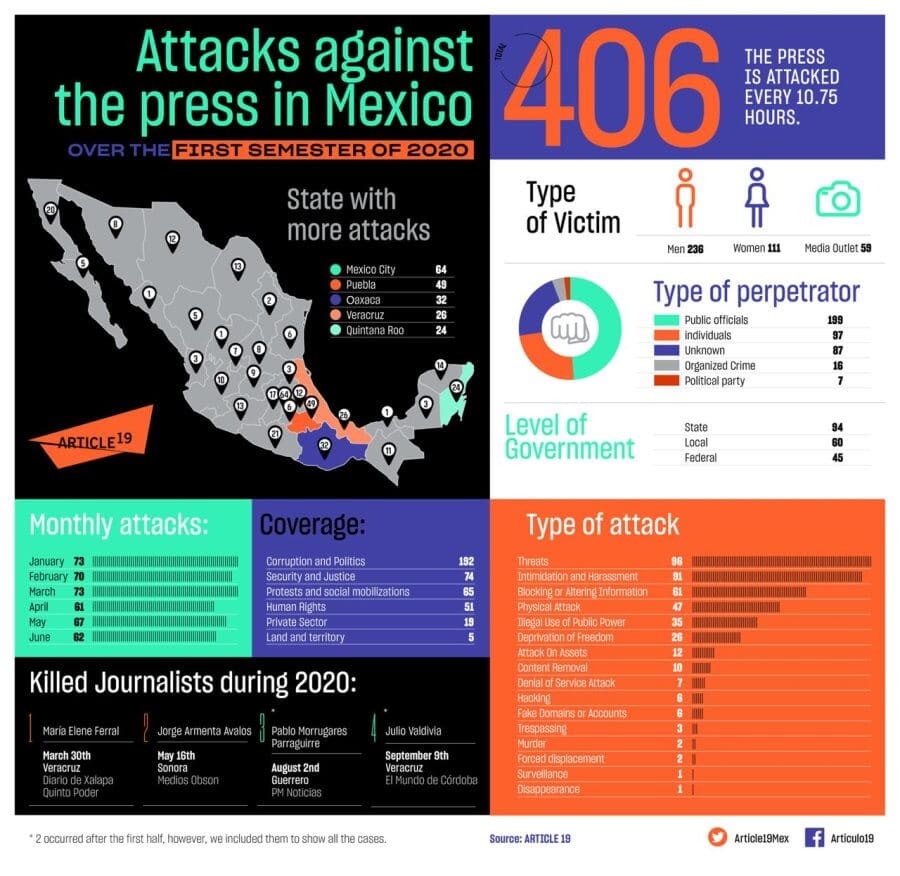 The causes of violence

Almost half of all 199 documented attacks were perpetrated by public officials. As ARTICLE 19 reported in its special report on COVID-19 and freedom of expression, one of the factors leading to this is officials’ refusal to answer questions or receive criticism about their handling of the pandemic. ARTICLE 19 documented at least 68 attacks against journalists and media outlets during coverage of the pandemic during the reporting period.

In this sense, there is a multiplier effect, where the same strategy as that of the Federal government of President Obrador is repeated in the states. Instead of serving as spaces for dialogue or transparency, both the President and state Governors use press conferences to stigmatize and denigrate the press. In Baja California, Governor Jaime Bonilla and his team are responsible for at least 11 instances of blocking press access to informationblock  and character attacks on critical media. The governor has called liars those who investigate and dispute the data

presented about the handling of the pandemic. In Puebla, 25 attacks, a little more than 50% of the state’s total attacks, are directly linked to the government of Miguel Barbosa, who rejects questions from critical media.

There is also an increasing gender component to the violence. Over the first half of 2020, ARTICLE 19 registered 6 gender-based attacks against men journalists and 23 against women.  The total number of attacks against women journalists over that same period almost doubled from 56 to 111.  Relatedly, 16% of these attacks  took place during the coverage of  protests, including women’s rights movements. 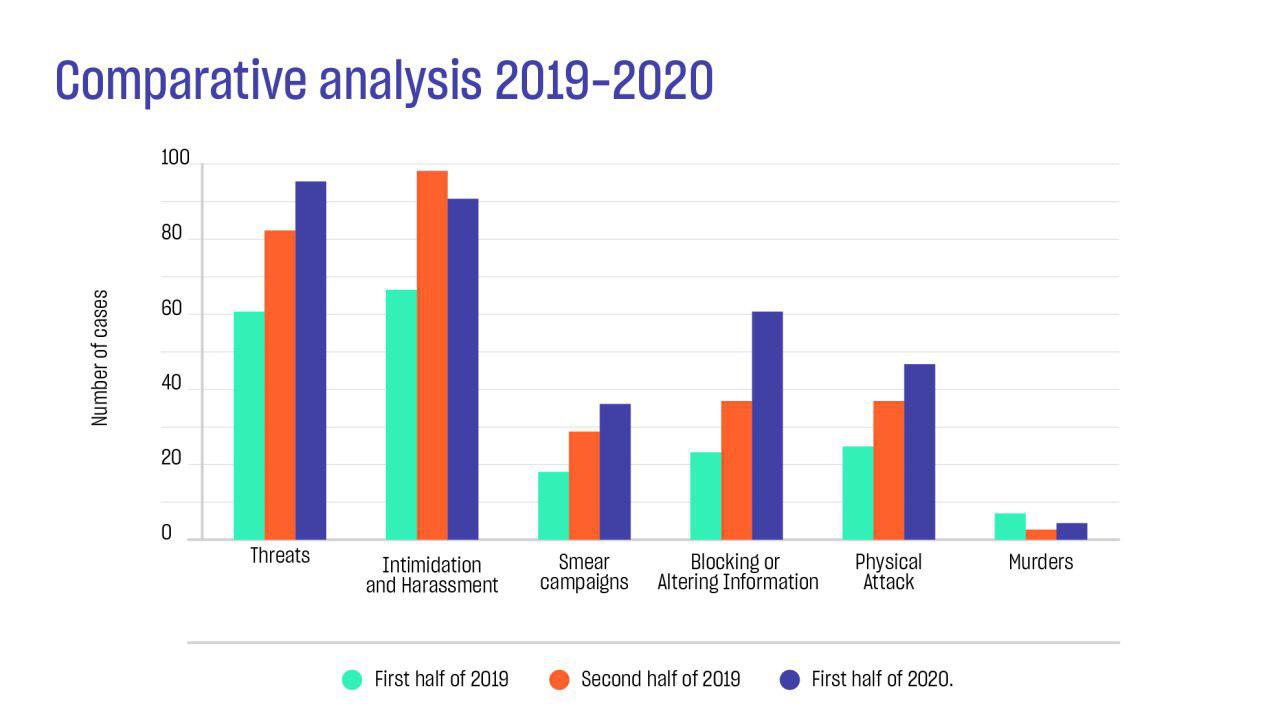 Ending attacks on the press

ARTICLE 19 urges federal, state and municipal governments to take urgent action to reverse this trend of violence. The State’s obligations to protect journalists require it to act diligently and effectively to prevent killings and an increase in other attacks against the press.

ARTICLE 19 calls on the governments at state and federal level to:

We further call for the Attorney General’s Office to diligently investigate cases, particularly those that are more serious crimes against freedom of expression. State prosecutors’ offices must investigate cases with due diligence in order to identify and bring before judicial bodies those responsible for attacks against the press. To this end, the investigative bodies must apply the Uniform Protocol for the Investigation of Crimes against Freedom of Expression.

[1] On 3 September, 2019 ARTICLE 19 issued a statement where it published the number of 249 aggressions. However, throughout the year the documentation processes continued and by the end of the year 280 aggressions were verified from January to June 2020. For more information see the original press release https://articulo19.org/primer-semestre-de-2019-en-el-nuevo-gobierno-cada-17-4-horas-se-agrede-a-la-prensa-en-mexico/, as well as the annual report 2019 Dissonance: Voices in Dispute: https://disonancia.articulo19.org/

[2] ARTICLE 19 Mexico registered attacks against the press since 2009.