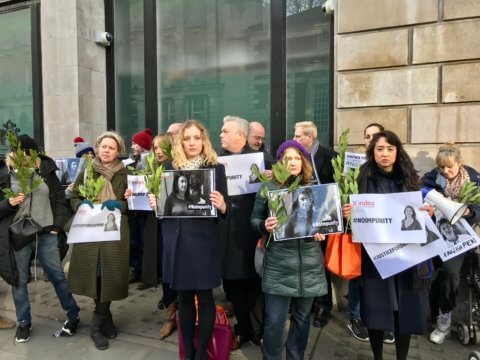 London, 16 January 2018. Today dozens of free expression advocates, anti-corruption activists, and other supporters gathered in London to remember investigative journalist Daphne Caruana Galizia three months after her tragic murder in Malta, and to reiterate calls for justice in her case.

Caruana Galizia was killed on 16 October 2017 when a bomb placed under her car exploded as she drove away from her home in Bidnija, Malta. A specialist in investigating corruption, her work included exposés of the shady secret deals, uncovered in the Panama Papers,that show how politicians and others hide illicit wealth behind secret companies. Her allegations about governmental corruption led to early elections in the country in June 2017.

“We gathered to honour a remarkable woman and courageous investigative journalist. We gathered to show the Maltese authorities and the international community that we will not forget Daphne Caruana Galizia, and we will not rest until all those who planned and carried out her attack are brought to justice. We gathered in support of the very principle of press freedom, as an attack against a journalist anywhere is an attack on journalism itself”, said Rebecca Vincent, UK Bureau Director for Reporters Without Borders.

“The corruption Daphne Caruana Galizia exposed affects people across Europe, and as Europeans we must show solidarity with her family and stand up for the truth. Justice requires not just punishing those guilty of her murder, but also ensuring that her investigations are widely read, both in Malta and across Europe. European leaders must come together to ensure there is no impunity in this case. If not, they send a chilling message that those standing against corruption may be silenced”, said Katie Morris, Head of Europe and Central Asia for ARTICLE 19.

“Until all the perpetrators, including possible masterminds, behind the murder of Daphne Caruana Galizia are fully prosecuted, journalists in Malta will work in fear. The UK government must do all it can to ensure this case receives the attention it requires and that, like so many other cases of journalist murdered around the world, justice is not denied”, said Elisabeth Witchel, Impunity Campaign Consultant for the Committee to Protect Journalists.

“Today we come together to pay tribute to Daphne Caruana Galizia and to stand in solidarity with her family. Daphne’s murder was an attempt to silence her but we will not allow that to happen. We will continue to share her words and her work, and to call for a full and impartial investigation into her death”, said Antonia Byatt, Interim Director, English PEN.

“Daphne Caruana Galizia’s heinous murder has cemented a new climate of fear and uncertainty for journalists, threatening the future of free speech in Malta. On the three-month anniversary of Caruana Galizia’s death, we remember her brave and vital work which continues to hold the Maltese authorities accountable. We hope the arrests of her alleged attackers are the run-up to an independent and fair trial to ensure this will not be a grave case of impunity”, said Hannah Machlin, Mapping Media Freedom Project Manager for Index on Censorship.

“Daphne Caruana Galizia’s reporting courageously exposed organised crime and political corruption in Malta. It is vital not only that her terrible murder be fully investigated and those responsible be brought to justice, but also that her legacy in Malta continues, and that corruption and impunity there be rooted out. By gathering to remember her today, we reiterate that those who expose corruption should be protected, not intimidated”, said Patricia Moreira, Managing Director, Transparency International.

Co-sponsors of the London vigil included ARTICLE 19, the Committee to Protect Journalists, English PEN, Index on Censorship, PEN International, Reporters Without Borders, and Transparency International. Participants read a statement from Caruana Galizia’s family, and held bay leaves in solidarity with her supporters in Malta.