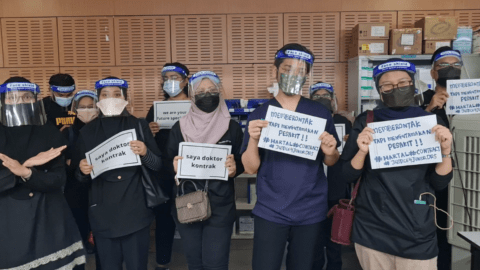 A recent surge in police harassment and criminal proceedings against activists, journalists, and peaceful protesters threatens human rights and undermines public health during the COVID-19 pandemic, said ARTICLE 19. The freedom to discuss public affairs and criticise officials is essential to ensure government effectiveness, efficiency, and accountability. The Malaysian government must stop targeting government critics and ensure that Malaysians can enjoy fundamental freedoms during the pandemic.

“In Malaysia, police harassment of journalists and activists is positively correlated with the volume and vigour of critical speech directed at the government. Protests and social media commentary are often followed by investigations and criminal charges,” said Matthew Bugher, ARTICLE 19’s Head of Asia Programme. “It is no surprise that this wave of harassment comes at a time when public confidence in the government is at a low.”

Over the past five days, Malaysian authorities have repeatedly acted to silence criticism of the government and intimidate those exercising the rights to freedom of expression and assembly.

On 24 July 2021, vehicle convoys drove through several cities in Malaysia to protest the government’s handling of the COVID-19 pandemic. Participants hung black flags outside their vehicles to call for the re-opening of Parliament, for an end to the state of emergency, and for the Prime Minister to resign. The following day, police called 14 individuals for questioning at police headquarters in Brickfields, Sepang, and Melaka Tengah districts under Section 21A of the Prevention and Control of Infectious Diseases Act 1988. Those investigated include SUARAM Coordinator Mohammad Alshatri, Undi18 co-founder Tharma Pillai, and activist Nashita Md Noor. Police called 14 more individuals for questioning on 26 July and a further six individuals on 27 July. These cases are also being pursued under the Prevention and Control of Infectious Diseases Act, and some individuals are additionally being investigated under Section 233 of the Communications and Multimedia Act for allegedly encouraging participants to join the protests.

On 26 July 2021, several hundred contract doctors—contractors who do not receive the same benefits as permanent staff doctors—went on strike at various hospitals and treatment centres across the country. They used the hashtag #HartalDoktorKontrak (meaning ‘contract doctors mass protest’) on social media and placards as they protested unequal career opportunities and lack of benefits. The Dang Wangi district police promptly opened investigations against protesters who gathered at the Kuala Lumpur Hospital under Regulation 10 of the Prevention and Control of Infectious Diseases Act (National Recovery Plan) Regulations 2021. Additionally, police officers informed journalists that only the Selangor Department of Information Services—a Selangor State government department—would be permitted to report on the strike.

At Sungai Buloh Hospital, the police shouted threats at the striking doctors and instructed them to disperse. Contract doctors at the Malaysia Agro Exposition Park Serdang (MAEPS) COVID-19 Quarantine Centre cancelled their walkout after being threatened by police, although some did manage to briefly hold up placards reading ‘On strike but putting patients first.’ Just after midnight on 28 July, lawyer Asheeq Ali posted on his Twitter account that police went to MAEPS to record statements from doctors that took part in the protest. He later posted a statement alleging that 12 doctors were questioned by the police until 3.50 AM without any legal representation. Asheeq stated that he was at the scene but was not allowed to enter the quarantine centre.

On 26 July 2021, police questioned editor-in-chief of the health news platform CodeBlue Boo Su Lyn under Section 505(b) of the Penal Code and Section 233 of the Communications and Multimedia Act at the Shah Alam police district headquarters. She was asked about an article titled ‘Volunteers Claim Selangor PPV Hid Covid-19 Cases, No Mass Testing Or SOP,’ which was published on 18 July and described workplace safety concerns at the Setia City Convention Centre mass vaccination site.

Authorities also have also revived an old case against an activist, heightening concerns about the government’s aggressive posture towards civil society. On 27 July 2021, Refuge for Refugees co-founder Heidy Quah was charged under Section 233(1)(a) of the Communications and Multimedia Act for a Facebook post she uploaded on 5 June 2020. She pleaded not guilty to the charges at Kuala Lumpur Sessions Court and paid RM 2,000 bail (approximately 500 USD). Heidy’s post recounts a mother’s description of horrific conditions she and her child faced in an immigration detention centre. Heidy was first questioned about the post on 7 July 2020 by the Putrajaya District police headquarters, more than a year before she was formally charged.

Open dialogue, transparency, and accountability from public authorities are especially important during public health crises. Scrutiny and critique of government approaches to managing the COVID-19 pandemic—whether by journalists, human rights defenders, or others—promotes accountability and fosters better responses. A free and independent media plays a central role in public health crises, including by providing information to those most likely to be affected.

The former Special Rapporteur on freedom of expression has stated that, ‘People have suffered because some governments would rather protect themselves from criticism than allow people to share information, learn about the outbreak, know what officials are or are not doing to protect them.’ He called on governments to cease the prosecution of journalists and respect and promote freedom of expression during the pandemic.

The Human Rights Committee has specifically addressed the COVID-19 pandemic and explained that restrictions on public assemblies put in place to control COVID-19 must comply with international human rights law. In particular, restrictions must be shown to be the least restrictive means of achieving the aim of protecting public health.

“The Malaysian government’s crackdown on expression does nothing to stop the spread of COVID-19, but rather erodes public trust and undermines the pandemic response,” said Bugher. “Transparency and accountability are fundamental components to public health campaigns. Police crackdowns are not.”