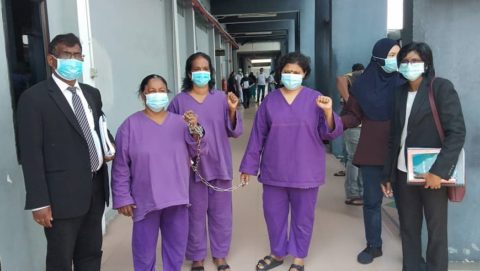 On 2 June, police arrested five individuals during a protest outside Ipoh Hospital in Kuala Lumpur. The protesters were raising concerns about the lack of personal protective equipment for hospital employees, arbitrary changes to work schedules, and denial of a government-authorised allowance for frontline workers. Those arrested were executive secretary of the National Union of Workers in Hospital Support and Allied Services (NUWHSAS) M Saraswathy, union officials L Danaletchumy and V Santhiran, and Socialist Party members P Jothi and C Subramaniam @ Raja.

Police have initiated an investigation against the five under sections 186 and 269 of the Penal Code—obstructing a public servant and negligence in the spread of an infectious disease, respectively—as well as section 7(1) of Prevention and Control of Infectious Diseases (Measures within the Infected Local Areas) Regulations 2020.

The five detainees are set to be released today, after the Magistrate Court refused a remand request by the police.

“It’s ironic and disheartening that the police have used an infectious disease law to investigate those calling for greater protections for healthcare workers during a pandemic.

“COVID-19 should not be used as a pretext to harass union members or deprive individuals of avenues to raise concerns about their health and safety. The arrest and detention of these individuals was not a proportional response to any public health concerns that the authorities may have had. After releasing these individuals from their custody, the policy should end this unwarranted investigation.”