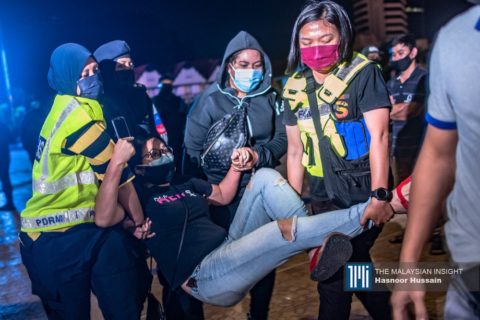 At 8 PM on 19 August 2021, Malaysian authorities arrested 31 protesters that attended a candlelight vigil organised by Sekretariat Solidariti Rakyat under the #Lawan banner to mourn the lives taken by COVID-19. Less than one hour into the event at Dataran Merdeka, police obstructed the vigil, arrested 17 men and 14 women—who were mostly youths—and confiscated their identity cards and phones. This is not the first #Lawan gathering to be obstructed by authorities.

Police took all 31 individuals to Dang Wangi District Police Headquarters where the presence of lawyers was restricted. Police officers only permitted three lawyers to enter the station and represent the detainees. By midnight, all participants were ordered to pay a fine of RM 2,000 (approximately 500 USD) for violating regulations preventing demonstrations during the pandemic and were released. However, investigations are ongoing.

“The forceful and aggressive arrest of 31 protesters at a candlelight vigil demonstrates an alarming disregard for freedom of assembly. Authorities must stop treating peaceful protests as a threat to be neutralised and instead help ensure that the public can safely exercise their right to freedom of assembly, even during the pandemic.”

“By obstructing the protesters’ access to legal representation, the authorities are compounding human rights violations and undermining the criminal justice system. Authorities must stop using COVID-19 as a false pretence for petty arrests and the harassment of government critics.”